Looking at the short-term oscillators, negative momentum appears to be picking up. The MACD, currently at the zero mark, is only just below its red trigger line and seems to be trying to move into the negative zone, while the RSI is falling in the bearish territory.

If the 100-period SMA denies further losses, buyers could encounter initial resistance from the 50-period SMA joined by the lower Bollinger band around 2.5895 ahead of the mid-band at 2.6080. Moving higher, the region from the fresh swing high of 2.6284, coupled with the upper Bollinger band, to the 38.2% Fibo of 2.6358 could prevent the ascent from reaching the January gap and the 50.0% Fibo of 2.6825 overhead.

Overall, a negative move looks to be developing in the very short-term and a break below the 100-period SMA at 2.5740 would reinforce it. 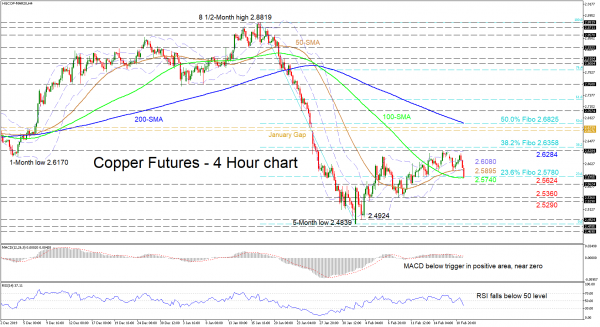