GBPAUD is recording a negative day, recovering the gap up that created earlier today. The price completed a three-week peak of 1.9646.

Chances for a downside reversal, however, are minimal as the 20-day simple moving average (SMA) remains above the 40-day SMA for more than a month now, while the red Tenkan-sen line has a steeper positive slope now, suggesting that the next move in the price is more likely to be up. In more evidence, the MACD continues to strengthen to the upside and above its trigger line, supporting this view as well.

Alternatively, if the pair finds support near the 20-day simple moving average (SMA) as it did in previous sessions, today’s high of 1.9646 and the three-and-a-half-month high of 1.9750 could keep the bulls busy before the attention turns to 2.0500, taken from the top on May 2016.

In the bigger picture, GBPAUD is still pointing up, framing a positive profile. A strong rally above the three-and-a-half-month high of 1.9750 would extend the upward pattern, making the outlook even more bullish. 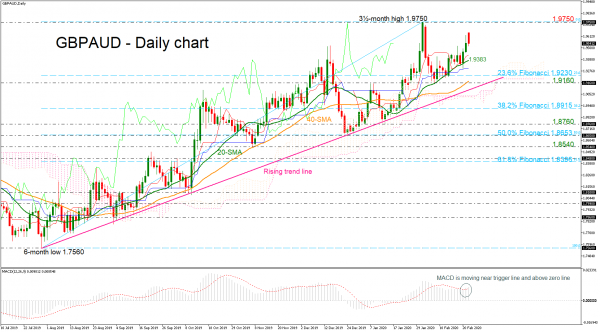