GBPJPY’s pullback from the multi-year low of 123.97 appears to be displaying symptoms of weakness after reaching back to the 133.13 level, which is the 38.2% Fibonacci retracement of the down leg from 147.95 to 123.97. Backing this view is the downward sloping blue Kijun-sen line and the intact bearish mode within the Ichimoku lines.

Furthermore, the short-term oscillators hint of wavering positive momentum. The MACD in the negative zone, although above its red trigger line, looks to be slowing, while the RSI, also in bearish regions, has turned downwards ahead of its neutral mark. The stochastics are nearing the overbought level, while the declining simple moving averages (SMAs) possess a negative bearing with the 50-day SMA approaching a bearish crossover of the 200-day one.

Summarizing, a negative bias is exhibited in the short-term picture if the price remains below 137.19. 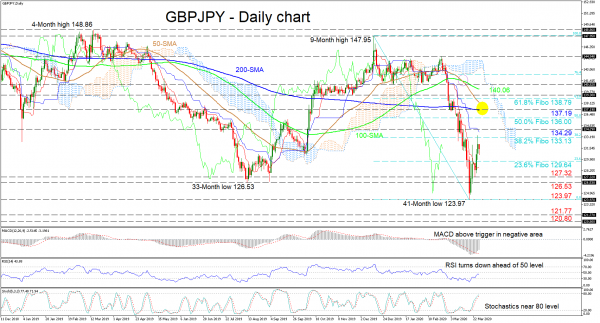 GBP/USD Outlook: The Pair Is Correcting Lower Below 1.2359