USDCHF is extending its downside correction off the 0.9900 peak past the fresh low of 0.9717 and into the Ichimoku cloud slightly underneath. Aiding this move is the recent bearish crossover within the declining Ichimoku lines and the strengthening negative demeanour in the short-term oscillators.

The MACD is descending under its red trigger line and has slipped below the zero mark, while the RSI is weakening in the bearish region. Moreover, the stochastic lines are sinking in the oversold territory, also promoting a negative move. That said traders need to be aware of the positive signals still reflected within the 50- and 100-period simple moving averages (SMAs), which could see a neutral-to-bullish picture return.

Overall, a shift to the downside appears to be evolving in the near-term picture. 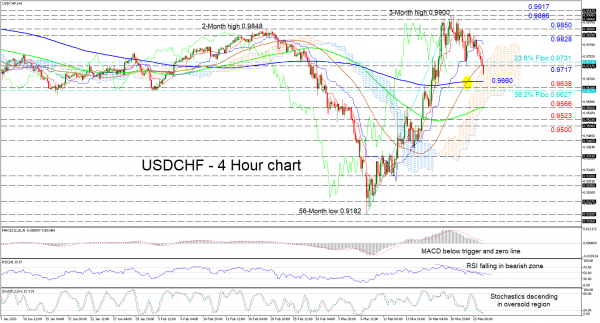