The GBP/USD pair closed the week in the red at 1.2996, as speculation that the BOE won’t need to raise rates and Brexit jitters weighed on the Pound. According to the official release, inflation in the UK rose by less-than-expected in June, taking off the pressure over Carney, who pledged to be tolerant with inflation above 2% within the ongoing political uncertainty. Negotiations between the UK and the EU didn´t succeed as parts can´t agree on how to deal with the divorce bill, with the EU want it to be monitored by the European Commission, something that the UK rejects. The Pound managed to recover some ground on Friday, but failed to sustain gains beyond the 1.3000 threshold, bouncing from the 61.8% retracement of it latest daily advance at 1.2930, a strong static support for the pair reached last Thursday. In the daily chart, the price settled above a horizontal 20 DMA, while technical indicators hover around their mid-lines, with no clear directional strength. In the 4 hours chart, the pair presents a neutral-to-bearish stance, as the upside is being contained by a bearish 20 SMA and the 38.2% retracement of the mentioned rally at 1.3005, while technical indicators turned marginally lower right below their mid-lines. 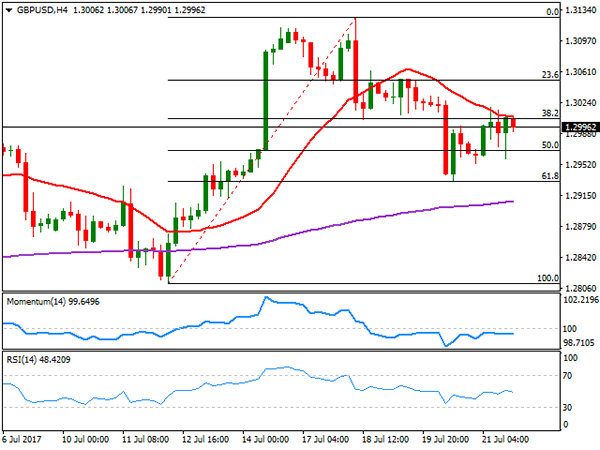