AUDUSD has been nicely developing along the rising 50-period simple moving average (SMA) on the four-hour chart after hitting a floor around the 50% Fibonacci of the downleg from 0.7031 to 0.5506.

Expectations are for the pair to trade neutral-to-positive as the RSI is moving sideways above its 50 neutral mark and the MACD is softly rising above its red signal line. A positive bias would be confirmed above 0.6385, with the 61.8% Fibonacci of 0.6448 likely coming next under the spotlight. Should the price strengthen above this point, the 0.6535 barrier may attempt to block the way towards the 0.6655-0.6700 restrictive area.

On the downside, the 50-period SMA currently at 0.6628 may keep supporting the market. Should sellers clear that line, the door would open again for the 50% Fibonacci of 0.6268 and then for the 200-period SMA around 0.6200. Any close lower would doubt the sustainability of the market’s recent uptrend, bringing the 38.2% Fibonacci of 0.6100 next into view. That said, the bullish cross between the 50- and the 200-period SMAs is suggesting that the upward direction may rather stay intact.

In brief, AUDUSD is likely to face a neutral-to-positive bias in the short-term. Trend signals for a longer-term period also look positive. 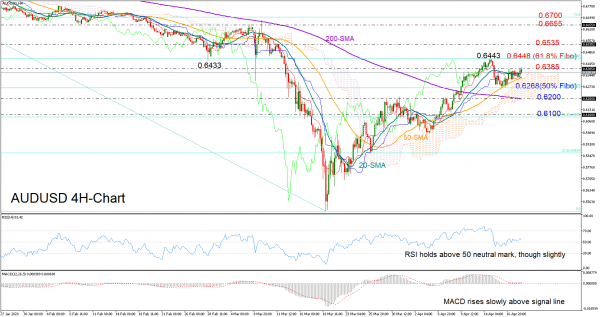 AUD/USD Stalls – Is the Rally Near an End?