On Monday, April 20th, the major currency pair is slightly falling not far from 1.0868. the coronavirus pandemic and its consequences remain the key trigger for all global financial markets, including both American and European economies.

According to the CFTC (Commodity Futures Trading Commission), earlier hedge funds increased their long positions in the Euro; at the moment, their volume is the biggest over the previous five weeks. The USD can be failed by the rhetoric of US President Donald Trump, who intends to re-open the country’s economy. The plan for relaunching the American economic system, which the White House is currently preparing, implies four weeks of canceled social distancing that significantly hurts both consumers and businesses. However, the country’s states that want to re-open their facilities must show a downward trajectory of coronavirus cases on their territories for at least two weeks in a row. So far, 29 states have qualified, but the numbers may change quickly.

There won’t be a lot of numbers important for EUR/USD this week. The ones that are worth paying attention to are related to the US real estate market: they may show how deep consumers demand and purchasing power plummeted.

In the H4 chart, EUR/USD is moving below 1.0877. in the short-term, the pair is expected to continue trading inside the downtrend towards 1.0750; this movement may be considered as the fifth descending wave. After reaching this level, the price may start a new correction to return to 1.0900. From the technical point of view, this scenario is confirmed by MACD Oscillator: its signal line is moving below 0. Considering that the market may yet continue downtrend, the line also expected to continue moving downwards. 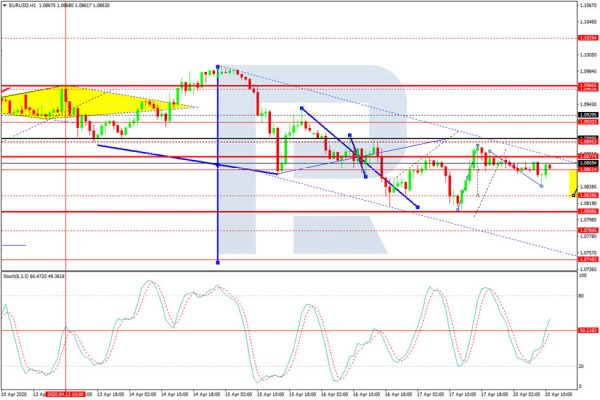 As we can see in the H1 chart, the pair is forming the first descending impulse towards 1.0825. Possibly, today the price may reach this level and then start another correction towards 1.0860. After that, the instrument may form a new descending wave with the short-term target at 1.0785. From the technical point of view, this scenario is confirmed by Stochastic Oscillator: its signal line is moving below 50 and may continue falling to reach 20, thus indicating that the pair may reach the target of the first descending impulse. Later, the line may reverse and move towards 80. 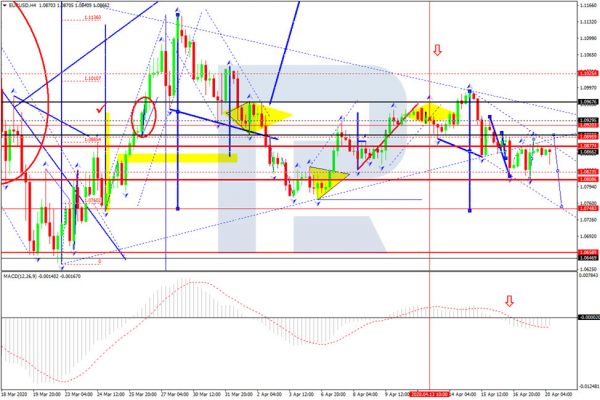