Brent Oil Outlook: Brent Oil Falls To The Lowest Since 1999 On Panic Over Supply Glut And A Lack Of Storage

Brent oil fell to the lowest since 1999 on Wednesday as extension of previous day’s 25% fall probed below $16 per barrel. Brent oil price managed to stay afloat above $20 level in past few days after US shale oil slumped into negative territory for the first time in the history, but worsening conditions in global oil sector eventually pushed the price lower. Oil prices were strongly hit by demand being smashed by coronavirus crisis that halted the global economy and caused the world being flooded by oil which cannot find a buyer or been stored as all storage places are almost full, which resulted in the wildest fall in the history in past two days. Report from American Petroleum Institute (API) on Tuesday showed that US crude inventories rose by 13.2 million barrels previous week, slightly above 13.1 million barrels forecast. Weekly report from US Energy Information Administration (EIA) is due later today and forecasted to show build of 15.1 million barrels (vs previous week’s 19.2 million barrels rise). It is unlikely that global oi sector is going to emerge from troubles soon, as OPEC+ decision to reduce output by 9.7 million bpd was immediately described as insufficient. Also, some signs that key members of the cartel may increase production cut, is likely to get stuck until next OPEC official meeting scheduled in June. Adding to negative outlook was Tuesday’s decision of Texas regulators to delay vote for forcing US oil producers to reduce output. 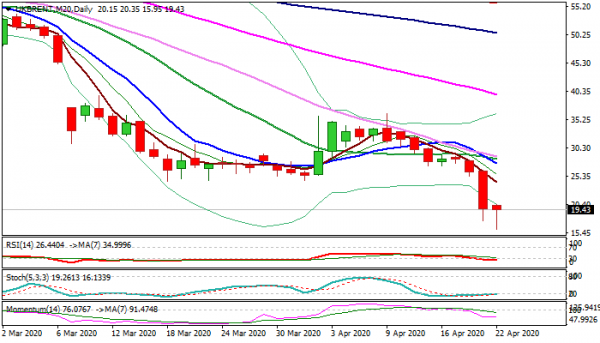