On Wednesday, the Mortgage Bankers Association’s Mortgage Applications data for the week ending May 22nd are expected to be released. Finally, the U.S. Federal Reserves is releasing its Beige Book.

The Euro was bearish against most of its major pairs with the exception of the CHF, JPY and USD. In Europe, Germany’s GfK Consumer Confidence Index for June was released at -18.9 (vs -18.2 expected).

The Australian dollar was bullish against most of its major pairs with the exception of the NZD.

The USD/CAD fell 194 pips to 1.3791 Monday making it the largest mover of the major pairs. Traders who are bearish may want to consider the 1.3825 level as a stop-loss if you are riding the trend lower. A break above 1.3825 would call for a reaction near the 20-period moving average. For now, let’s see if 1.3756 support can hold. 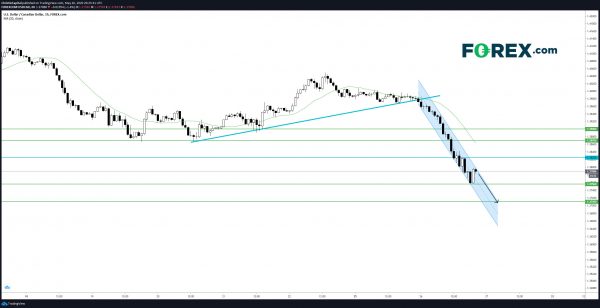