The flatness in the MACD and the blue Kijun-sen line reflect a stall in positive momentum, while the upward slopes in the red Tenkan-sen line and the RSI promote strength in the advance. Moreover, the rising 50-period SMA may be nearing a bullish crossover of the 100-period one, which could further aid the ascent. However, with present conflicting signals and the stochastics bouncing at the oversold mark, the market may stay undecided before a directional picture clears up.

Otherwise, if sellers steer below the 38.2% Fibo of 132.00, the area of the approaching bullish cross around 131.54 – where the upper surface of the Ichimoku cloud also lies – could obstruct the pair from reaching the 130.66 low. Steeper declines may then challenge the key trough at 129.28 and the 23.6% Fibo of 128.93 beneath, in attempts to revive a negative bearing in the pair.

Summarizing, in the short-term picture a neutral-to bearish bias remains intact and a break below 129.28 would reinforce the negative picture. Yet, a shift above 133.22 could see a neutral tone return, while a break above 135.44 may turn the outlook bullish. 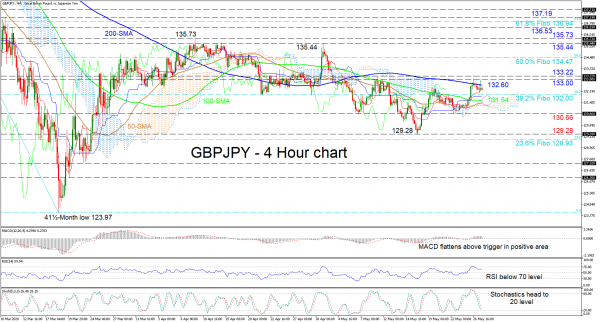