Gold is nearing the upper Bollinger band that is currently situated at the swing high of 1,754. This occurred after buyers took the upper hand around 1,692 – that being the 23.6% Fibonacci retracement of the up leg from 1,455.17 to the 91-month high of 1,765.03. Further aiding a bullish picture are the positively charged simple moving averages (SMAs) and the increased gradient of the 50-day SMA.

Additionally, the short-term oscillators reflect some strengthening in positive momentum. The MACD in the positive region, though below its red signal line, looks to reclaim it, while the RSI is improving in the bullish section from its 50 mark. Furthermore, the stochastics are heading higher with the %K line approaching the 80 level.

To the upside, first resistance may emerge from the 1,754 level that is joined by the upper Bollinger band. Piercing above this, the recent multi-year peak of 1,765.03 may challenge buyers’ efforts to reach the nearby 1,775 obstacle. Another run up may thrust the price towards the peaks of 1,796 and 1,803 which relate to October of 2012 and November 2011.

If sellers resurface, initial support may occur at the mid-Bollinger band at 1,719 ahead of a key preventative region around the 23.6% Fibo of 1,692, where the latest low resides and the lower Bollinger band (1,687) has merged with the 50-day SMA. Successfully steering beneath this tough region, the bears may test the troughs of 1,669 and 1,660 before facing another strengthened support barrier from the 38.2% Fibo of 1,647 to the 100-day SMA of 1,637.

Summarizing, for now the short-term timeframe sustains its positive bearing above the 1,692 mark and a close above 1,765.03 could boost this outlook. 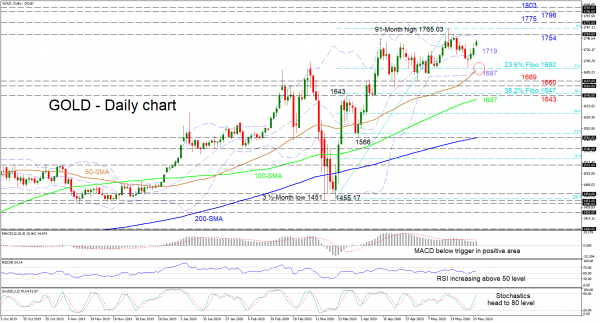