AUDUSD today overcame the 0.6684 tough resistance from March 9, producing a nearly four-month high of 0.6772 and pushing the medium-term timeframe back into neutral territory. Although the price appears to have stalled ahead of the 0.6777 high from January 29, the Ichimoku lines retain their positive tone, while the rising simple moving averages (SMAs) and the Ichimoku cloud feed the bigger positive picture.

The short-term oscillators at the moment display conflicting signals in directional momentum. Taking a glimpse at the RSI, it has deflected off the 80 overbought mark and has slightly retreated with the recent stall in appreciation. Yet, with the MACD increasing above its red signal line in the positive region, additional advances cannot be ruled out for now.

In the event that buyers conquer the immediate 0.6777 barrier, this may boost the pair to challenge the inside swing low of 0.6826 and the high of 0.6878, both around late January. If these obstacles are surpassed, the pair may stretch towards the 0.6933 border.

Overall, the pair may hold its positive bearing in the very short-term as long as it remains above the cloud and the 0.6505 mark. 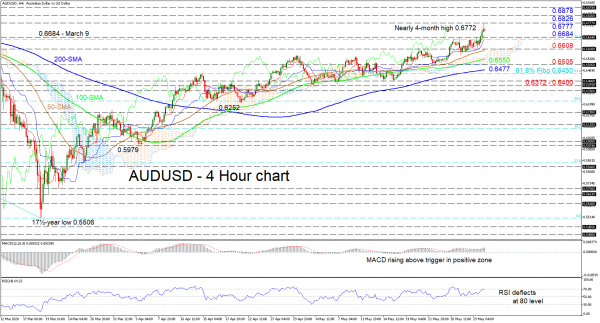