Copper Futures Give Up Some Gains; Positive Picture Stands

Copper futures retreated slightly from their freshly plotted four-and-a-half month high of 2.6959. Confirming the bullish sentiment that has mostly controlled the ascent from the 45-month low of 1.9684 are the rising Ichimoku lines. Additionally, the improving 50-day simple moving average (SMA) is endorsing forthcoming advances.

The short-term oscillators are positively tilted in spite of the current weakening in positive momentum. The MACD, deep in the positive region, is waning above its red signal line, while the RSI has dropped under the 70 level but remains above the diagonal line. Moreover, the composed stochastic lines are in overbought territory but have yet to confirm a bearish mode.

A close above the upper surface of the Ichimoku cloud and the fresh high of 2.6959 could repower the hike to see the 2.7554 inside swing low of January 3 ahead of the 2.7919 obstacle. Persistent buyers may stretch the price towards the 2.8323 barrier before revisiting the eight-and-a-half month peak of 2.8819.

Alternatively, extended negative pressures could face initial tough support from the 200-day SMA at the 2.5589 mark, where the red Tenkan-sen line also is located. Next, the critical region underneath until the 2.5014 support – that includes the 2.5274 hurdle – could prove difficult to dive past. However, should the price breach these borders, the 2.4509 trough and the section between the 100- and 50-day SMAs (2.4208 – 2.3821) may provide the next limitations to downside moves.

In brief, the very short-term outlook remains bullish above the 200-day SMA and the 2.4509 trough, with the commodity warranting some caution should negative tensions escalate. 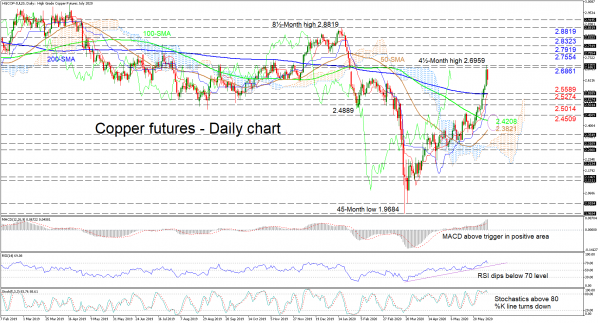