US 500 stock index (Cash) is attempting to reclaim the 200-period simple moving average (SMA) after dipping below it in the previous session. The recent horizontal glide in the price after the pullback from the three-and-a-half-month top of 3,233, has been dwindling as negative tensions build.

The neutral-to-bearish tone in the 50- and 100-period SMAs and the negative bearing in the Ichimoku lines further back the deteriorating view. Additionally, the price remains below the cloud and the vital 200-period SMA. However, a contradicting picture is painted within the short-term oscillators, which reflect hopes of further improvement. The MACD, in the negative region and below its red trigger line looks to retake it, while the RSI hovers after a bounce near the 30 level. Furthermore, in the stochastic oscillator, the %K line has completed a bullish crossover at the 20 mark endorsing positive moves.

To the upside, initial resistance could arise from the 200-period SMA coupled with the red Tenkan-sen line at 3,047. Pushing higher, congested restrictions from the cloud’s lower surface until the 76.4% Fibo of 3,110 could halt buyers’ efforts. Should these obstacles be conquered, an area of tops from 3,156 – 3,168 may come into focus. If buying interest remains, the 3,233 high could then draw attention.

Overall, in the very short-term, in spite of the recent strengthening negative signals, the index holds a neutral-to-bullish bias above 2,933. 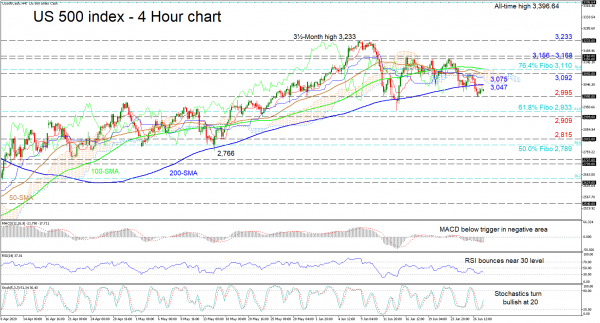