GBPJPY appears restrained within the Ichimoku cloud by the 50- and 100-period simple moving averages (SMAs) over the previous sessions. The price has found difficulty in maintaining a jump back above the 200-period SMA and thus has adopted a sideways move over the last week. Backing this view are the unclear directional signals reflected in the Ichimoku lines as well as the conflicting slopes of the 50- and 100-period SMAs.

Looking at the MACD and the RSI indicators, they reflect a slight improvement in price action as the pair holds in the cloud, within the one-week horizontal market.

If buying interest picks up, early resistance could occur at the 200-period SMA at 133.69 ahead of the vicinity of the ceiling of the range, which may be fortified by the roof of the cloud coupled with the 100-period SMA. Should buyers conquer that challenging area, the 134.47 level could come into focus, which happens to be the 50.0% Fibonacci retracement of the down leg from 144.94 to 123.97. Another decisive run up may see the 135.13 high ahead of a critical resistance region from 136.14 – 136.33.

To the downside, immediate tough support could commence around the 132.97 mark, where the bottom of the cloud, Ichimoku lines and 50-period SMA currently reside. Plunging under this may test the bottom region of the directionless market from the 38.2% Fibo of 132.00 until the 131.62 barrier. If this fails to halt a decline, the 130.66 low may grap traders’ attention ahead of the 129.28 trough.

Summarizing, the pair seems directionless in the very short-term timeframe with a break either above the upper surface of the cloud around 133.97 or below the 131.62 level, needed to set in motion a clearer direction. 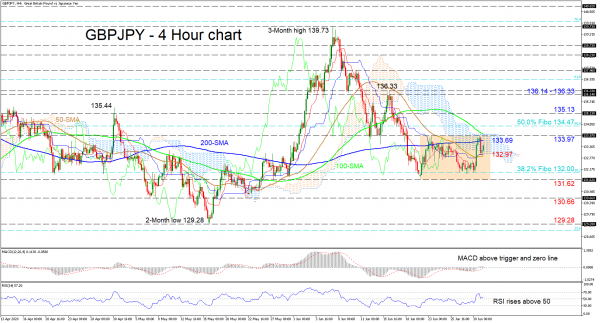