EURCHF appears to be crawling sideways in the latest sessions, after the plunge from the 1.0914 high reversed ahead of the horizontal 100-day simple moving average (SMA), currently at 1.0606.

The MACD and the RSI are not signalling any strong directional signals as they both hover slightly below their neutral marks. Additionally, the mostly flattened 100-and 200-day SMAs further indicate the weakness in price setting a stronger course for now. However, the rising 50-day SMA promotes some strength in the pair as does the stochastic oscillator, whose %K line has positively overlapped the red %D line, bouncing off the 20 level.

In brief, a neutral bias has returned to the short-term timeframe. Yet, to build confidence, the pair would need to break above the 1.0914 peak, while a drop below 1.0575 could trigger negative worries. 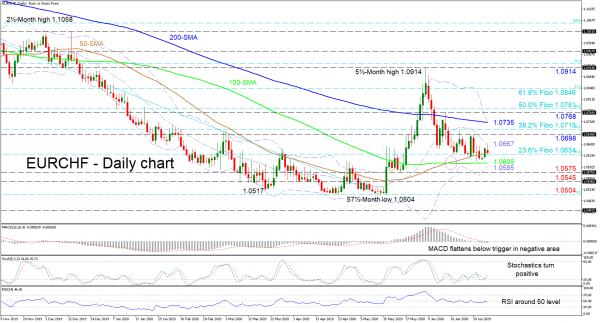