WTI oil futures are clearly demonstrating signals of waning positive sentiment despite an intact positive bearing. The somewhat flattening in the positively charged Ichimoku lines further backs this view. Noteworthy is the conflicting trajectories in the simple moving averages (SMAs), which may aid and extend consolidation in the commodity in the near-term.

Taking a look at the short-term oscillators, positive momentum appears to have disappeared. The MACD, trails below its red trigger line in the positive zone, while the RSI stalls in bullish territory. However, the stochastic oscillator maintains a positive tone with the %K line having reached the 80 mark.

Should buyers manage to drive over the limiting 41.60 high, early tough resistance may develop from the vital 43.69 resistance and the 200-day SMA slightly overhead at 44.04. In the event these borders fail to refuse advances, the price may confront the 48.80 – 49.29 resistance band prior to shooting for the 54.62 peak.

Summarizing, in the short-term timeframe, the positive picture retains optimism above the 37.07 low and surpassing the 200-day SMA may return strength in the ascent. 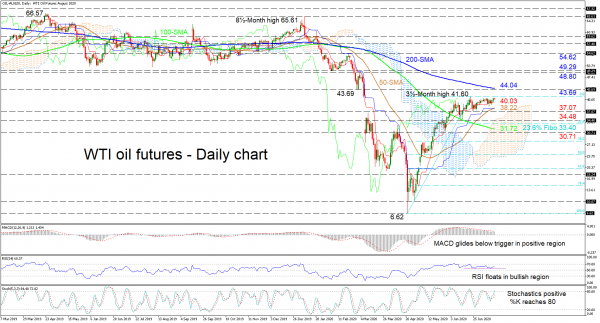