USDJPY hit a bottom at 104.18 and bounced aggressively towards the 106.00 area in an attempt to return to its previous range. The price, however, could not sustain gains above that level, retracing back to the 105.00 territory instead.

The 38.2% Fibonacci of the 108.15-104.18 downleg at 105.70 could not successfully block the way to the downside either despite restricting it earlier in the day, and the pair is currently looking exposed to the 23.6% Fibonacci of 105.12 and the 20-period simple moving average (SMA) in the four-hour chart. If more losses follow, the price could re-challenge the 104.77 support area before meeting the 104.18 trough.

Alternatively, if the pair manages to return above the 38.2% Fibonacci, it could push harder to close above the 50% Fibonacci of 106.18 and the upper surface of the Ichimoku cloud. A successful break above these borders could turn attention to the 61.8% Fibonacci of 106.66 and the 200-period SMA. Beyond that line, there is another obstacle within the 107.28-107.52 zone that the bulls need to overcome to reach the 108.00 mark.

In brief, USDJPY is expected to keep decelerating in the short-term unless it rebounds above 107.70. Immediate support could emerge near 105.12. 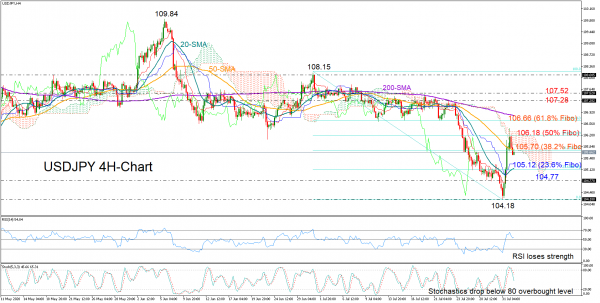