USDCAD has pushed under the flat blue Kijun-sen line at 1.3313. An improvement from the 5½-month low of 1.3232 was capped by the Ichimoku cloud, which had merged with the falling 100-period simple moving average (SMA). This resulted in realignment with the bigger negative bearing, something also backed by the falling SMAs and the short-term oscillators, as well as the downward direction of the red Tenkan-sen line.

The MACD is under its red trigger line but just above the zero mark, while the RSI is weakening in bearish territory. Moreover, the declining stochastic lines have pierced below 20, promoting negative moves.

Pushing lower beneath the blue Kijun-sen line, the price may rest at the 1.3266 obstacle on the way towards the 1.3232 multi-month low. Diving past this trough, the 1.3200 support from February 21 may prevent further declines from meeting the 1.3153 barrier from January 28, and the 1.3100 handle nearby.

Overall, the short-term picture retains a neutral-to-bearish tone below the SMAs and the 1.3482-1.3500 boundary. Should the price deteriorate below the 1.3232 mark, this may reinforce the negative bias. 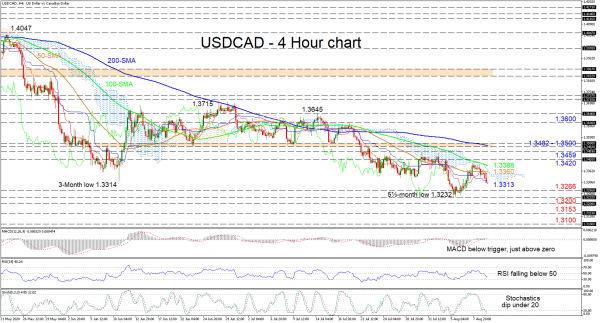