The US 30 index has been in an upside tendency since March 23, reaching a new five-and-a-half month high of 28,180. The price is standing above the ascending trend line and the long- and short-term simple moving averages (SMAs), and the MACD oscillator is still holding above the trigger and zero lines. However, the RSI is returning lower after the bounce off the 70 level.

Alternatively, a jump above the five-and-a-half month high of 28,180 could add more buying sentiment, meeting the 28,935 resistance, identified by the inside swing low on February 10. A step higher could send the bulls to retest the all-time high of 29,582.61.

Summarizing, the US 30 index bounced off the multi-month high of 28,180 and if there is a break below the rising trend line, it would change the bullish picture to negative. 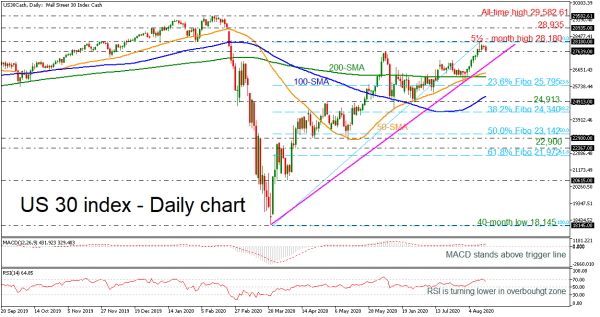