USDCAD has somewhat paused after the pullback from the near 8-month low of 1.2993. The rebound in the price appears to be resting on the mid-Bollinger band at 1.3131, shadowed by a governing bearish structure. The dictating downward sloping 50- and 100-day simple moving averages (SMAs) and the recently completed bearish crossover of the 200-day SMA, may deliver an extra boost to a southward result.

Negative signals continue to reign within the short-term oscillators, backing a deteriorating picture. The stochastic oscillator holds a weakening tone, promoting further losses. The MACD, in the negative region, has pushed above its red signal line and is heading towards zero, while the RSI hovers below its neutral threshold. Yet, noteworthy is the fact that the MACD and the RSI have endured below the 50 mark for an extended period of time.

Summarizing, a prevailing bearish bias controls the short-to-medium-term timeframe below 1.3271. 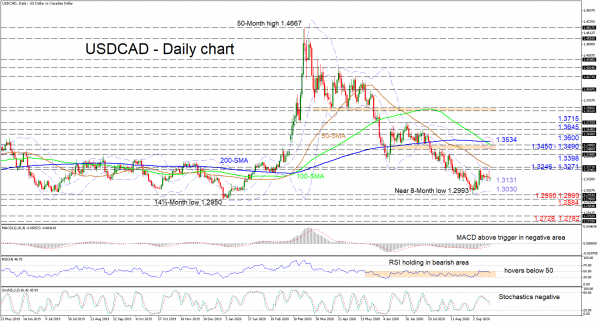 USDJPY Under Pressure Ahead Of Key Jobs Data Thursday