GBPJPY is continuing the rebound off the 132.95 support level but with slower momentum, reaching the red Tenkan-sen line at 134.72. The very short-term bias looks positive as the stochastic keeps gaining ground above its oversold zone, creating a bullish crossover within its %K and %D lines, while the RSI is flattening near the 30 level.

The 100-day simple moving average (SMA) currently at 135.72 could be a trigger point for steeper bullish actions. If the pair manages to break the lower surface of the Ichimoku cloud, it could meet the 136.45 resistance. Slightly higher, the 200-day SMA at 136.71 and the 20-day SMA at 137.16 could be crucial levels, though more buyers could be waiting to enter once the price breaks above the 40-day SMA at 138.15 and more importantly the previous six-month peak of 142.70.

However, if the pair reverses back to the downside, investors could pause its move at the 132.95 support and then at 131.70. If the price continues to drop, support could next come somewhere between the 129.30 and the 127.27 levels before the focus shifts back to the three-and-a-half-year low of 124.00.

In the medium-term picture, the break below the six-month ascending trend line turned the outlook from positive to negative. However, chances for another bullish move are still rising as the momentum indicators are ticking up. 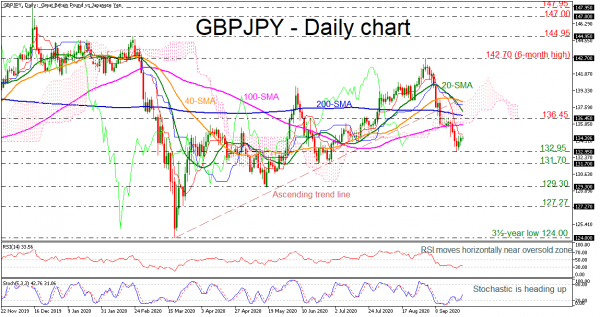 GBPAUD may consolidate despite footing off 100-MA