Gold has found some footing on the 100-day simple moving average (SMA), after deflecting off a preventative line drawn from the all-time high of 2,074 and dropping below the Ichimoku cloud. The paused bearish Ichimoku lines transmit weakness in negative momentum, while all SMAs maintain a bullish tone.

That said, the MACD and the RSI reflect the stall in downwards price action, while the stochastics aim to improve. The MACD has eased in bearish territory, while the RSI floats above the 30 mark. The stochastic %K line has nudged above its red %D line but has yet to confirm its desire to shift bullish.

To the downside, tough support may occur from the 100-day SMA at the 1,848 immediate low, before a limiting section from the inside swing high of 1,818 to the 1,828 barrier. Deteriorating past these obstacles, the key 1,789 trough may attempt to halt further loss of ground. However, if steeper declines prevail, the precious metal may then target an area of lows from 1,746 to 1,757.

Alternatively, if buyers take advantage of the foothold on the 100-day SMA, initial resistance may arise from the lower band of the cloud around 1,886, ahead of the Ichimoku lines from 1,910 to 1,920. Pushing upwards, the descending line may test the climb ahead of the 50-day SMA currently at 1,946. Overrunning these, a buffer zone from the cloud’s upper surface at 1,960 to the 1,974 high may attempt to prevent the commodity from appreciating towards the 1,992 and 2,016 peaks.

In brief, the short-term picture of gold is looking weak under the cloud and dropping diagonal line. Yet, if the price is sustained above the 100-day SMA and creeps sideways, a second test to break the restrictive line would confirm the next direction. 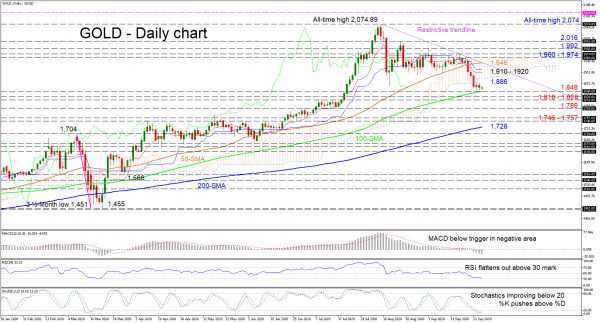 Gold In Wait-And-See Mode Ahead Of US Election, Bears Eye 1,900