The German 30 index (cash) slumped below the 200-day SMA and towards June’s lows on Wednesday, terminating the range-bound trading that held above that line in the past four months.

Expectations are for the index to lengthen its downward pattern off the 13,460 peak as the 20-day SMA is trying to further deviate below the 50-day SMA and the MACD is resuming negative momentum below zero. Yet, with the RSI and the Stochastics fluctuating within the oversold territory, some stabilization cannot be ruled out. Perhaps, the 11,587 – 11,360 zone, which includes the 38.2% Fibonacci of the March rally, could be the nearest place to rest and an opportunity to escape a downfall towards the 50% Fibonacci of 10,711.

Should the bearish action immediately fade, the price may attempt to resume its neutral status above the 200-day SMA, which continues to flatten around the 23.6% Fibonacci of 12,163. Beyond that border, the market may boost sentiment if it manages to cross above the 20- and 50-day SMAs, though a rally above October’s peak of 13,188 could prove to be a bigger achievement and a ray of hope that the uptrend from the March bottom is not over yet.

In short, the German 20 index is likely to face more weakness in the coming sessions, though a confirmation could only come below 11,360. 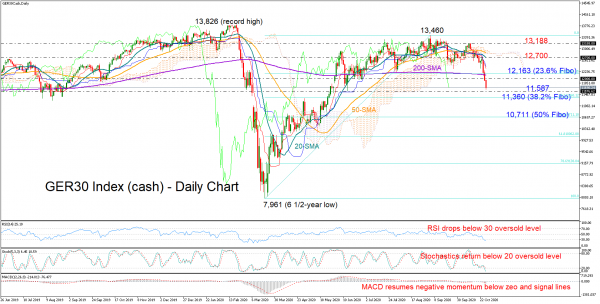