GBPJPY appears to have been again denied passage above the 140.00 mark, which happens to be the 76.4% Fibonacci retracement of the down leg from 144.94 to 124.00, following a bounce off the 100-day simple moving average (SMA). The slipping 200-day SMA and the horizontal Ichimoku lines aid a pause in positive price action, while the upward incline of the 50- and 100-day SMAs, conveys strength for advances.

At this time, the short-term oscillator’s exhibit mixed signals in directional momentum. The MACD, in the positive region, is holding above its red trigger line, while the dipping RSI is falling lower in bullish territory. The stochastic oscillator has turned bearish with its %K line dipping under the 80 mark and the %D line, promoting a deeper pullback in the price.

Otherwise, driving higher buyers may be challenged by the steadfast resistance belt from the 76.4% Fibo of 140.00 until the 140.28 peak. However, if the bulls conquer this boundary, the price may slingshot towards the 141.42 high before reeling in the six-month peak of 142.70. Surpassing this too, the 143.71 level could come into play.

Summarizing, GBPJPY is neutral-to-bullish in the short-to-medium-term timeframe. Early indication of a direction could come from a break either above 140.28 or below 134.39. 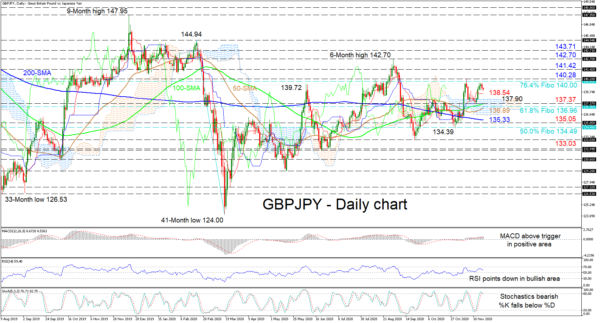