WTI crude oil futures found some footing around the 34.00 level last month and returned to a bullish trend shortly thereafter.

The price is currently hovering around the almost nine-month high of 46.22 and a former restrictive area, where any decisive close higher may prove valuable to the market. The RSI indicator is approaching the overbought territory, while the MACD is strengthening its bullish move above its trigger and zero lines, suggesting more gains.

A jump above the 46.22 level may meet immediate resistance around the 48.80 barrier before the bulls try to overcome this level to re-challenge the 54.62 barrier, registered on February 20.

In brief, in the short-term picture, the situation seems to be getting more interesting as the 20- and the 40-day SMA posted a bullish crossover above the 200-day SMA. Should the lines intersect each other and keep a large distance, the positive outlook may turn even brighter in the medium-term as well. 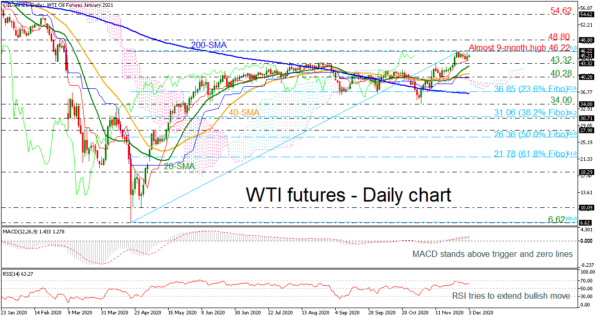