EURUSD is conveying a strong bullish tone rocketing above the Ichimoku lines and the simple moving averages (SMAs), despite currently receding from seven-month high levels. The soaring Ichimoku lines are promoting positive price action while the advancing SMAs are defending positive sentiment.

The short-term oscillators are reflecting some waning in positive momentum. The MACD, quite some distance in the positive region, is stalling ever so slightly above its red trigger line, while the RSI is making efforts to remain in overbought territory. Moreover, the stochastic lines have completed a bearish crossover and are sponsoring additional negative moves.

Retreating from the proximity of the seven-month highs may see the pair face initial support from the 1.2087 barrier, coupled with the climbing red Tenkan-sen line. In the event the pullback extends, the pair may then meet the 1.2039 low and adjacent 20-period SMA, together with the blue Kijun-sen line. Next, should the 20-day SMA and the support section of 1.2002-1.2010 fail to defend against further loss of ground in the pair, the price may sink towards the cloud’s upper surface and the key 1.1917 trough.

If buyers retake the reins, they will need to push over the immediate 1.2138 resistance stretching back to April 2018, which has halted the ascent. Clearly overrunning this obstacle may shoot the pair towards the resistance region of 1.2200-1.2209, containing the 261.8% Fibonacci extension of the down leg from 1.1919 until 1.1745. Conquering this boundary too, the price could then raise resistance up to the 1.2245 high, before aiming for the limiting zone of 1.2289-1.2306.

Summarizing, although dwindling slightly, EURUSD maintains a bullish outlook in the short-term timeframe above the SMAs and the 1.2039 trough. 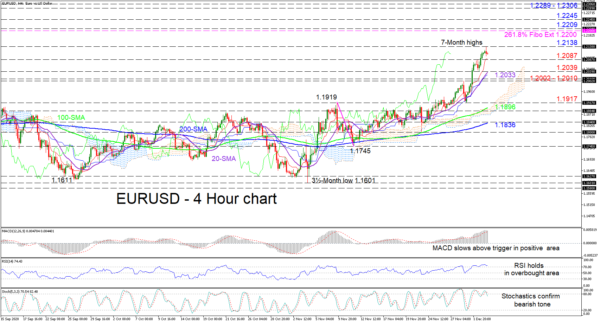