EURUSD Consolidates After Correction Below 200-MA

Taking a glimpse at the short-term oscillators, it is apparent that positive momentum is struggling. The MACD, marginally below zero and a tad above its red trigger line, seems unable to push above the neutral mark, while the RSI is zig zagging around its 50 level, trying to sustain a push into bullish territory. Yet, the stochastic oscillator is improving, suggesting more positive price action.

In a negative scenario, initial downside friction could occur at the 20-period SMA at 1.2109 ahead of a critical support foundation of 1.2052-1.2080, containing multiple troughs. In the event the decline extends underneath the lower Bollinger band, residing at the lower end of the aforementioned support base, adjacent constrictions could arise from the 1.2039 barrier. Sinking past this too, the bears may challenge the 1.2002-1.2010 support boundary.

Overall, in the short-term, the pair’s decline seems subdued as long as the price remains above 1.2052 trough. Moreover, the pair’s confidence may be restored should the price return above the 200-period SMA and the 1.2222 mark. 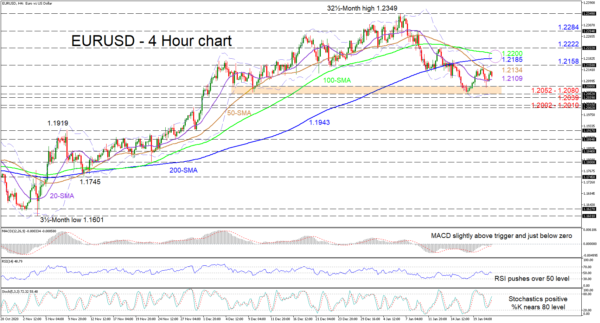