AUDUSD Targets January’s Top, But Will The Bulls Persist?

AUDUSD is buying the shortfall from January’s top of 0.7819 thanks to the 20-day simple moving average (SMA), which managed to cancel bearish forces for the second time.

The RSI has resumed its positive momentum above its 50 neutral mark, though the indicator continues to hold a downward direction, while the red Tenkan-sen line, although in a comfortable distance above the blue Kijun-sen, remains flattish. The MACD is also sending some cautious signals as it keeps weakening below its red signal line, though at a softer pace.

Hence, the bulls may need to establish a foothold above the tentative descending trendline at 0.7790 to motivate fresh buying towards the former resistance of 0.7875. Moving higher, the pair may get congested within the 0.7940 – 0.7990 restrictive territory.

Should the upper trendline hold firm, the price may return to the support of the 20-day SMA currently around 0.7700. Failure to bounce here could bring the lower line of the short channel at 0.7650 on the radar. Note that the blue Kijun-sen and the 23.6% Fibonacci of the 0.6990 – 0.7819 upleg are also in the neighborhood. If the bears claim the latter too, a steeper decline may develop towards the 50-day SMA and the 38.2% Fibonacci of 0.7500.

In the bigger picture, the market maintains a bullish outlook as long as it trades above the 50% Fibonacci and September’s peak of 0.7412.

Summarizing, AUDUSD seems to be restoring its bullish bias in the very short-term picture, though traders may not be convinced until the pair builds a sustainable base above 0.7790. 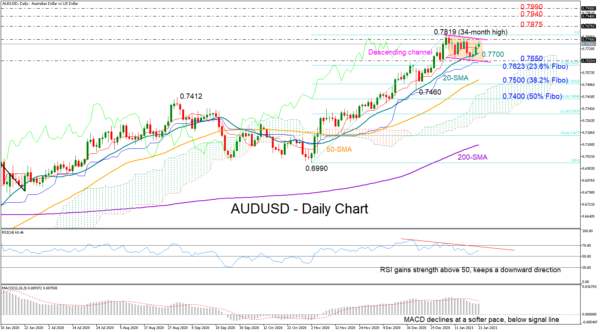