EURCHF has retreated to the vicinity of the 50-day simple moving average (SMA) after fading under the formed support around the 1.1000 mark, which intersected with the Ichimoku cloud’s upper band. The advancing SMAs are defending the positive pattern. Despite a slight pause in the falling trajectory of the Ichimoku lines, they have yet to reflect any clear opposing shift to the negative price action.

Nonetheless, the short-term oscillators are conveying mixed signals in directional momentum and thus are promoting an unclear outlook. The MACD is persisting below its red trigger line and has ever so slightly dipped underneath the zero threshold, while the RSI is making attempts to steer higher in the bearish territory.

For a positive scenario to unfold, buyers would initially need to drive the price back above the resistance belt of 1.1000-1.1007 and the nearby barrier of 1.1033. This could reinforce upside momentum, which may result in buyers overstepping the Ichimoku lines and propelling the price towards the 1.1118 high. Surpassing the next resistance section of 1.1151-1.1171 may restore belief in the positive picture, as buyers aim for the 1.1189 level, which happens to be the 123.6% Fibonacci retracement of the down leg from 1.1058 to 1.0504.

Summarizing, hopes for an upside correction in EURCHF remain alive above the 1.0955 trough and the cloud’s floor at 1.0944. Endorsing this view are the failed attempts of sellers to preserve the break below the 50-day SMA. 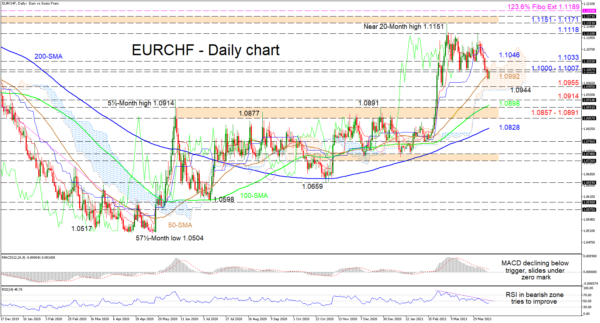