WTI oil futures have nudged back above the 60.00 mark, overstepping the Ichimoku cloud and the 100-period simple moving average (SMA) on the four-hour chart at 60.03. The commodity’s price action remains confined between the limits of 57.25 and 62.24. The bearish demeanour within the 100- and 50-period SMAs seems to have subsided considerably, and they are now promoting a more neutral price picture.

The static Ichimoku lines are not conveying any clear directional momentum in the commodity, while the short-term oscillators are promoting slight improvements in the price. The MACD has pushed above the zero mark, where its red trigger line also currently resides, while the RSI is struggling to sustain its gains in the bullish region.  The positive stochastic oscillator is backing the latest optimistic price action.

If buyers prod the price higher, initial resistance could arise from the 60.87 barrier. However, even if buyers successfully overcome this, they will need to defeat the roof of 61.72-62.24 of the sideways pattern, in order to reinforce belief in the upside. Surpassing the upper frontier of the range could propel the price towards another region of resistance located between 63.13 and 63.62.

Alternatively, if sellers resurface, they may encounter a congested cluster of support from the 100-period SMA at 60.03 until the blue Kijun-sen line at 59.32, before testing the nearby low of 58.72. Diving beneath the latter, the trough of 58.10 could provide some downside friction before the bears challenge the support base of 57.25-57.66. Should the mentioned foundation fail to negate further loss of ground, the price may then head for the 55.29 obstacle.

As things stand, WTI futures appear to be incapable of setting a new price course as directional impetus is non-existent to break the price out of the limits of the current trading range. 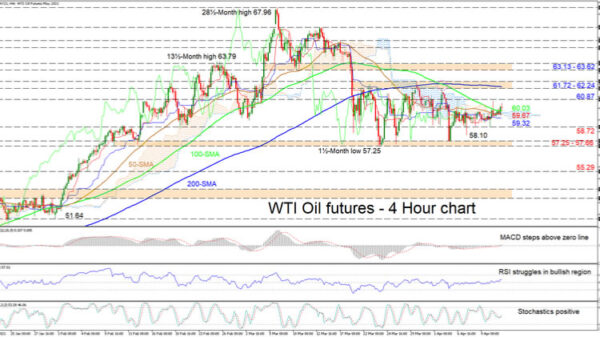