EURJPY extended its upward trajectory towards a new 32-month high of 132.94 on Monday but the bullish action was mostly anemic during the day as the strong resistance line kept upside pressures under control once again.

Downside corrections would not be surprising in the short-term as the price has been fluctuating along the line for a couple of days. The RSI and the Stochastics are somewhat in line with this narrative as the former is fluctuating marginally below its 70 overbought mark, while the latter is advancing above 80. Yet, neither of those indicators has reached a peak, hinting that buyers may play another round before giving up.

In the event the bears take the lead, the red Tenkan-sen line at 131.96 could add some footing as it did in previous days ahead of the 20-day simple moving average (SMA) at 131.60. If the sell-off gets more legs, the way would open towards the supportive trendline and the 50-day SMA seen within the 130.85 – 130.55 zone. Lower, the upper surface of the Ichimoku cloud at 130.00 could provide another opportunity for an upside reversal.

Summarizing, EURJPY continues to hold a bullish bias in the short-term picture, though the window for improvement seems to be narrowing as the pair is fluctuating in overbought territory. 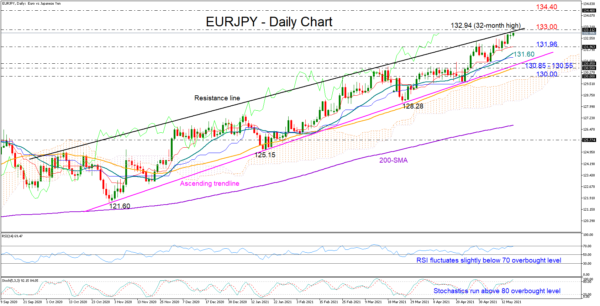