A really disappointing US Nonfarm Payroll report was not enough to keep the common currency afloat last Friday, resulting in the EUR/USD pair closing the week in the red around 1.1860. The greenback initially plunged across the board with the release, and if fact, remained pressured against most of its major rivals afterwards. What hit the EUR was new jawboning from ECB through news agencies reporting that the Central Bank will probably delay tapering QE beyond September, according to "people familiar with the matter," amid latest EUR’s strength. US data showed that the world’s largest economy added 156,000 new jobs in August, well below the 180K expected, the unemployment rate uptick to 4.4% from 4.3%, while more relevant, wages’ growth remained steady at 2.5% YoY, not building the inflationary pressures the Fed needs to pull the trigger again.

On Sunday, North Korea said it has successfully tested a hydrogen bomb for its intercontinental ballistic missile, causing a 6.3-magnitude tremor in the country’s northeast. South Korea and Japan asked for the strongest possible response and for the UN to include new sanctions to "completely isolate" the country, whilst US President Trump twitted that such response "will not work," as they only "understand one thing," referring to a military response. Risk aversion will likely lead the weekly opening, favoring the Swiss Franc and Gold the most this Monday, which by reflection will likely help the common currency to advance. In the meantime, the ECB will have its monetary policy meeting this week, with speculative interest focused on whether the ECB will confirm their fall discussion on tapering, or the delay suggested by the latest rumors.

From a technical point of view, the decline has barely affected the dominant bullish trend, as the price managed to bounce earlier on the week from its 20 DMA, the immediate support at 1.1860. Technical indicators in the daily chart have retreated within positive territory, whilst the price is far above a long-term ascendant trend line, around 1.1700/20 for this Monday. A daily close below this last should signal an interim top has been reached. Shorter term, and according to the 4 hours chart, the risk turned to the downside, with the price extending below a bearish 20 SMA, and the RSI indicator heading south around 41, as the Momentum hovers within negative territory. Below 1.1860, the pair has its next strong support in the 1.1780/90 region, a probable bearish target in the case the pair is unable to regain the 1.1900 level. 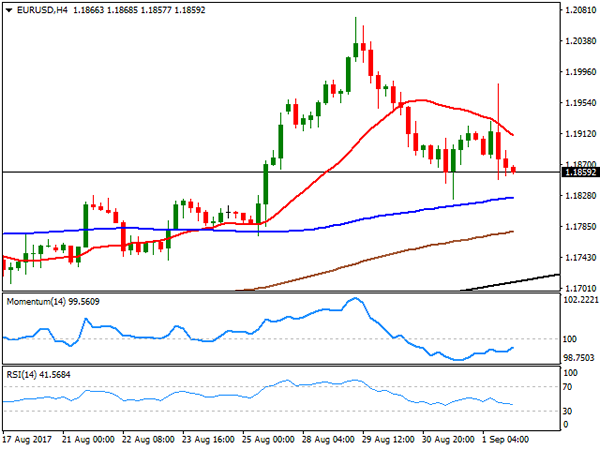 The USD/JPY pair ended the week in the green at 110.24, as despite US soft employment and sentiment data released on Friday, the pair managed to recover ahead of the close. Worst-than-expected US jobs report sent the pair down to 109.55 intraday, but quickly recovered on the back of advancing Treasury yields. The yield on the 10-year Treasury note settled at 2.16% from a previous 2.12%, while the yield on the 30-year Treasury bond was also higher at 2.77% from previous 2.72%. Helping the pair to bounce, was the US official manufacturing PMI, up to 58.8 in August from July reading of 56.3, indicating growth in the manufacturing sector for the twelfth consecutive month and partially offsetting the NFP report. Escalating geopolitical tensions during the weekend, as North Korea performed a major nuclear test, should affect the JPY at the weekly opening, although given that Japan is within the conflict area, speculative interest may prefer gold or the CHF as safe-havens rather than the yen. The weekly gain was quite limited and not a game changer for the dominant bearish trend, as the pair topped for the week at 110.66, a couple of pips above the 38.2% retracement of its latest daily decline between 114.49 and 108.26. In the daily chart, the 100 and 200 DMAs maintain their bearish slopes above the current level, while technical indicators are stuck within neutral territory, directionless. Shorter term, and according to the 4 hours chart, the price is around its 200 SMA, having bounced sharply after testing the 100 SMA, while the Momentum indicator heads lower around its mid-line and the RSI consolidates around 58, limiting the downward potential. 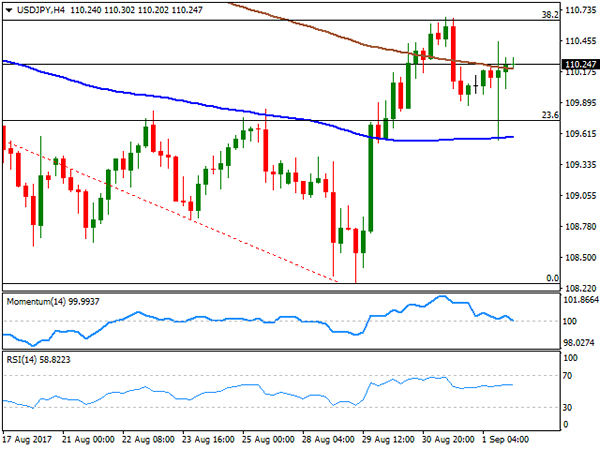 The GBP/USD pair recovered up to 1.2995 on Friday and on the back of poor US employment data, ending the day, and the week marginally higher at 1.2950. A scarce UK macroeconomic calendar kept the pair within a limited range these last few days, alongside with headlines indicating another round of tough Brexit negotiations. During the week, EU chief negotiator, Michael Barnier, said that "no progress" was made on substantial issues, while EU Junker stated that none of the UK’s Brexit position papers were satisfactory. The base of the conflict is that the EU wants to settle the Brexit bill before moving any further, while the UK refuses to talk money and wants to agree on future trade first. UK Brexit minister, David Davis was on the wires over the weekend, insisting that there was no legal obligation that force the UK to pay for EU projects after leaving the bloc, also calling Barnier "silly," as according to Davis, progress was actually made. Anyway, uncertainty over the matter prevented the pair from regaining the 1.3000 level, and will likely remain as a market motor in the days to come, alongside with risk sentiment. From a technical point of view the pair presents a neutral-to-bullish stance in the daily chart, as the price settled above its 20 SMA, whilst technical indicators head nowhere within positive territory. The pair, however, settled below the 38.2% retracement of its latest daily decline around 1.2965, a level that proved strong since mid August. In the 4 hours chart, the technical outlook is quite alike, with the price above horizontals 20 SMA and 200 EMA, both within a well-limited range, and technical indicators heading nowhere within positive territory. The 50% retracement of the mentioned decline stands around 1.3030, a probable bullish target in the case of a Pound’s rally. 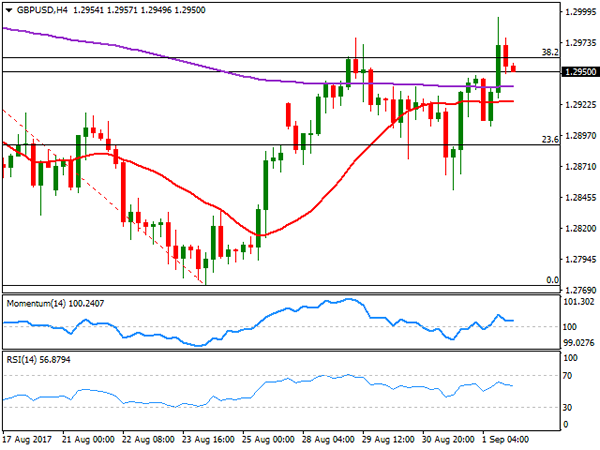 Gold prices posted strong gains this past week, with spot closing at $1,325.91 a troy ounce, its highest settlement since September last year. There were multiple factors behind gold’s advance, being turmoil around the US government, a persistent weak dollar, and escalating geopolitical tension in Asia among the most relevant, as all contribute to the case of a slower pace of tightening coming from the US Federal Reserve. Gold traded as high as 1,328.82 before retreating modestly, anyway poised to extend its advance, as weekend developments in North Korea will likely fueled demand for the safe-haven metal. Technically, the daily chart shows that the price remains far above a bullish 20 DMA that continues advancing above the larger ones, whilst technical indicators have partially lost upward strength within overbought territory, far however, from suggesting a slide. In the 4 hours chart, technical indicators keep heading north, with the RSI indicator nearing overbought readings, as the price remains above bullish moving averages, all of which supports additional gains on a break above the mentioned yearly high. 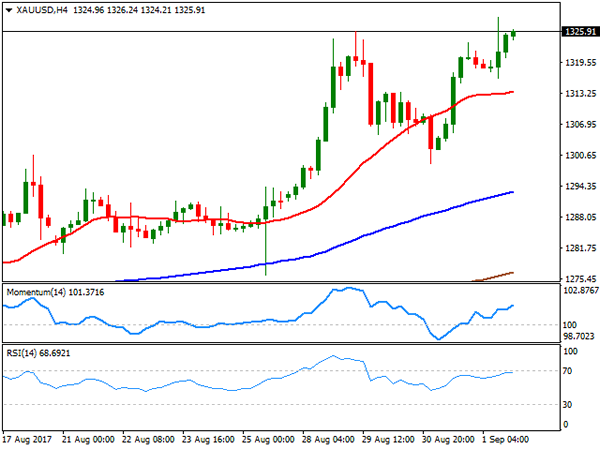 West Texas Intermediate crude oil futures edged sharply higher on Friday, ending the day around $47.30 a barrel, down anyway for a fifth consecutive week. News that the US stockpiles declined by more than expected, according to the EIA, only supported the commodity partially, as the Hurricane Harvey has affected US’s refining capacity, and will probably result in less demand for crude in the next few weeks. The EIA data belong to the week ending August 25th, right before the Hurricane hit the US Coast Gulf. News on Friday indicated that the number of active US rigs drilling for oil remained unchanged at 759 last week, according to Baker Hughes that anyway reported that could not verify South Texas rigs amid the impact of Harvey. Daily basis, WTI ended a few cents above a horizontal 100 DMA, while technical indicators aim modestly higher within neutral territory, which is not enough to confirm additional gains ahead. Shorter term, and according to the 4 hours chart, the price remained below its 100 and 200 SMAs, with the shortest heading south below the largest and acting as immediate resistance at 47.50, while technical indicators aim north well above their mid-lines, supporting additional gains on a break above the mentioned resistance. 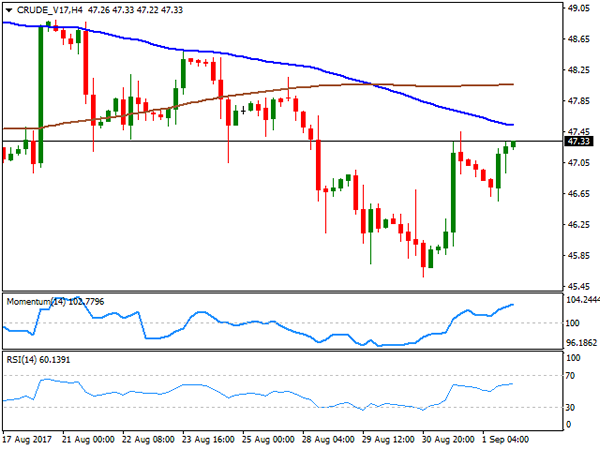 Wall Street closed with gains on Friday, with the DJIA adding 39 points, to end at 21,987.56, while the S&P added 5 points, to close at 2,476.55. The Nasdaq composite settled at an all-time high of 6,435.33 after adding 6 points or 0.10%. US jobs data, which showed that sluggish wage growth persisted in August, backed the rally in local equities as the report could result in US Federal Reserve slowing its tightening pace. Within the Dow, General Electric was the best performer, adding 2.40%, followed by Chevron which added 1.06%. United Technologies was the worst performer, ending the day 1.50% lower, while Microsoft followed, ending down 1.11%. The daily chart for the DJIA shows that the index settled well above a still marginally bearish 20 DMA, while technical indicators turned flat, the Momentum around its mid-line and the RSI now at 58, as the index retreated from its daily high, unable to hold above the 22,000 threshold. In the 4 hours chart, the Momentum indicator keeps retreating within positive territory, the RSI consolidates around 64, while the index remains above all of its moving averages, keeping the downside limited as long as the index holds above the 21,960 region, where buying interest defended the downside for most of the last two-days. 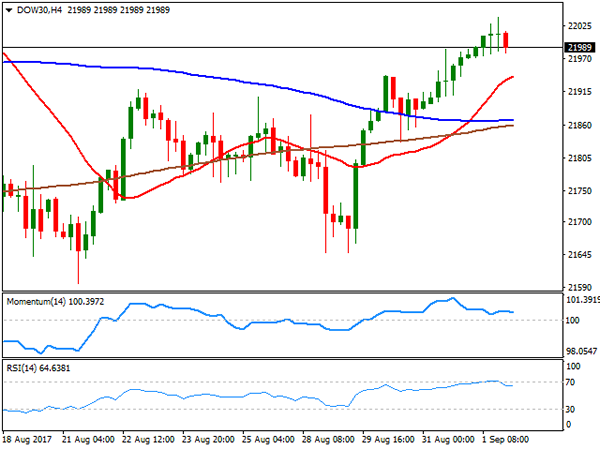 The FTSE 100 advanced 0.11% or 7 points on Friday to close at 7,438.50, backed by a rally in mining-related equities. Weaker-than-expected US data also help the benchmark to remain afloat, as Pound gains were well-limited, in spite of dollar’s weakness. Within the Footsie, Ashtead Group was the best performer, adding 2.53%, followed closely by Antofagasta and Glencore, both adding over 2.0%. Micro Focus International was the worst performer, down 7.74%, after the company reported that it merge with HPE could trigger penalties under 2016 US tax inversion regulations. The daily chart for the index shows that it settled above its 20 and 100 DMAs, both converging flat around 7,400, but also that technical indicators head higher within positive territory, favoring an upward extension for this Monday. In the shorter term, and according to the 4 hours chart, the index settled well above all of its moving averages, also converging within a tight range in the 7,400 region, while technical indicators eased modestly from overbought levels, rather reflecting the latest consolidation than suggesting an upcoming downward move. 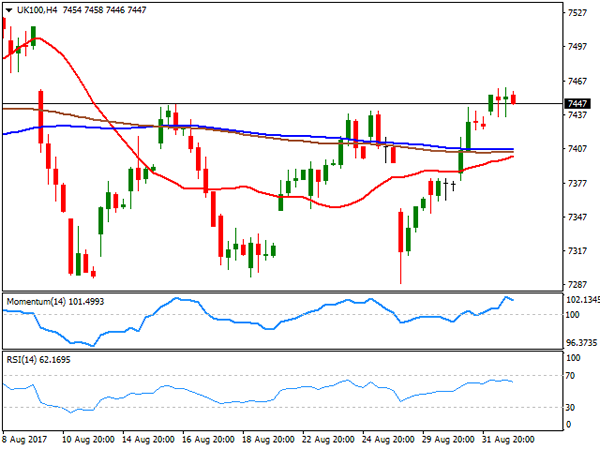 Major European indexes closed higher on Friday, with the German DAX adding 87 points to end at 12,142.64, up for third consecutive day. A weaker EUR, on news suggesting the ECB will delay discussing tapering until next December underpinned local equities. Automotive and mining stocks led the way higher in the region, and within the DAX, Deutsche Lufthansa was the best performer, up 3.23%, followed by Infineon Technologies that added 2.14%. ProSiebenSat.1 Media led decliners, closing the day 1.65% lower, followed by Linde that shed 0.65%. From a technical point of view, the daily chart shows that it settled a few points above a bearish 20 DMA, but also that technical indicators were unable to settle above their mid-lines, limiting the upward potential. In the 4 hours chart, the index advanced above a bearish 20 SMA and closed around a horizontal 100 SMA, while technical indicators turned modestly lower, holding anyway near overbought levels. The weekly high for the index was set at 12,191 with gains beyond it required to favor a new leg higher for this Monday. 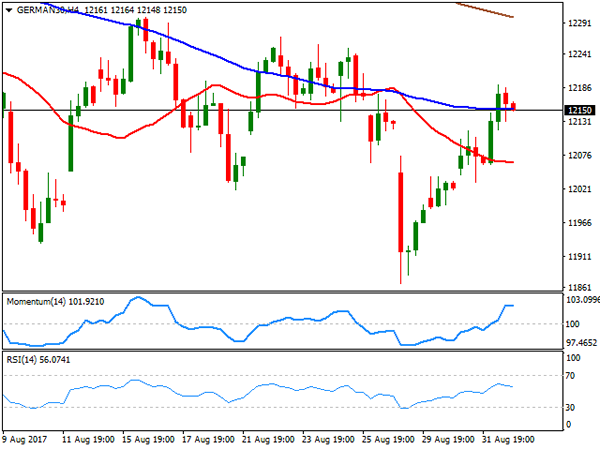