Price is trading in the red and seems poised to reach fresh new lows in the upcoming days. EUR/CHF is very heavy and looks unstoppable on the Daily chart. Is almost to hit a dynamic support, but most likely will take this out and will drop much deeper after a false breakout.

Seems like that the rebound is completed and now we’ll have a larger drop, but we still need a confirmation. The European currency has lost significant ground also versus the Yen in the morning as the Nikkei stock index plunged in the last hours.

The rate will be driven by the fundamental factors later, the Switzerland CPI may increase by 0.0% in the previous month, while the GDP by 0.5% in the second quarter and could exceed the 0.3% growth in Q1.

Price failed to stabilize above the fourth warning line (WL4) and now is going down. Is very close to reach and retest the upper median line (uml) of the minor ascending pitchfork. A breakdown seems imminent after the failure to approach and reach the 1.1536 previous high.

You should know that a valid breakdown below the upper median line (uml) of the ascending pitchfork will open the door for more declines in the upcoming period.

Price will increase further only if will be rejected by the upper median line and if will stabilize above the WL4. Technically could drop much deeper after the impressive rally, but only a valid breakdown will confirm it. 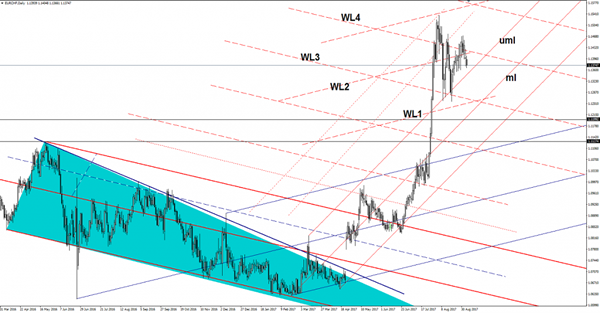