On Monday morning, the EUR/USD found support in the low level of September 22 at 1.1685. In addition, the weekly S1 simple pivot point of this week was located at this level. Near term future forecast scenarios were based upon whether or not the support holds.

In the case that the rate passes the support of the 1.1685 level, a decline would follow. A target for a potential decline would be the weekly S2 simple pivot point at 1.1648 and the 1.1650 mark.

Meanwhile, a holding out of the support level would most likely result in a recovery. A recovery of the EUR/USD could encounter resistance in the 1.1700 mark and the 61.80% Fibonacci retracement level at 1.1707 before aiming at the weekly simple pivot point at 1.1720 and the 55-hour SMA at 1.1725. 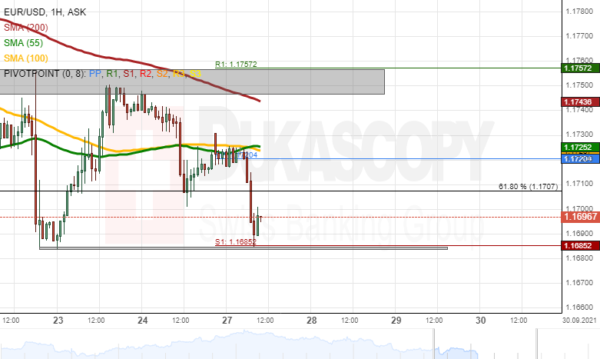