EURJPY has been posting an aggressive bullish rally over the past couple of days, reaching a fresh three-month high around the 131.20 resistance level and is in the process of completing a double bottom formation.

Technically, the RSI indicator is moving hovering in the positive region, while the MACD oscillator is ticking higher, surpassing its trigger and zero lines. Moreover, the 20- and 40-day simple moving averages (SMAs) are ready for a bullish crossover in the short-term, while the price has overcome the upper Bollinger band.

Should the pair strengthen its positive momentum and create a higher high than Monday’s session, the next resistance could come around 132.65. A break above this level would take the market until the more-than-three-year-high of 134.11, while even higher the market would shift the bias to a more bullish one.

However, if prices are unable to break 131.20, the risk would shift back to the downside, with the 130.05 support coming into focus as well as the 200-day SMA at 129.20. A drop lower would drive the pair until the 20- and 40-day SMAs around 129.40. The next key support to watch lower down is 127.90, which overlaps with the lower Bollinger band and is acting a significant support level, creating a double bottom pattern.

Briefly, in case EURJPY surpasses the 131.20 barrier, this would shift the three-month neutral bias to bullish and confirm the reversal double bottom pattern. 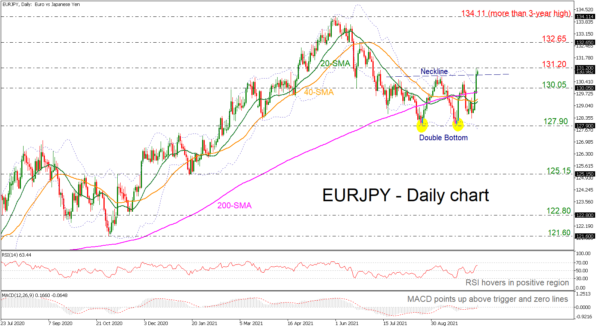