The Euro ticks higher in early European trading on Thursday but remains in a directionless mode for the third consecutive day, as markets await today’s ECB policy meeting and US Q3 GDP data for fresh direction signals.

The central bank is expected to stay on hold and push back against growing expectations for a rate hike next year, fueled by rising inflation.

ECB President Lagarde is likely to repeat that the central bank is not in hurry to tighten policy even if many major central banks are planning to do so.

Such a scenario would be seen as a dovish steer from the ECB and negative for the single currency.

Daily studies are mixed but the near-term bias remains with bears as the action stays capped by daily Tenkan-sen (1.1620) following pullback after recovery was repeatedly rejected under pivotal Fibo barrier at 1.1671 (38.2% of 1.1909/1.1524) and momentum weakens.

Expect an initial bearish signal on a firm break of 20DMA, which would be confirmed on a close below 200WMA/weekly cloud.

Conversely, lift above converging daily Tenkan-sen/Kijun-sen (1.1620/37) would ease downside pressure, but a sustained break of 1.1671 Fibo barriers would signal a continuation of recovery from 1.1524 (Oct 12 low). 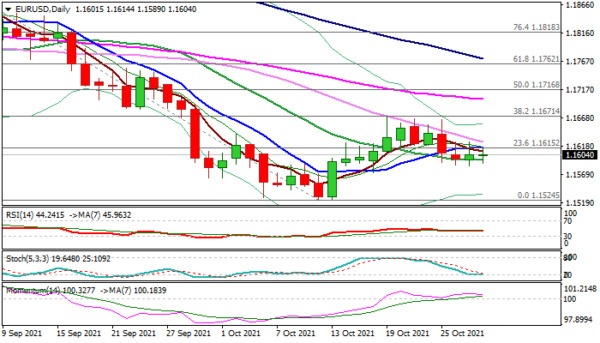