AUDUSD sellers have resurfaced and have driven the price beneath the mid-Bollinger band and towards the 0.7225 level, where the price recently rebounded. The bearish 50- and 100-period simple moving averages (SMAs) are sponsoring the downtrend in the pair from the near four-month peak of 0.7555.

The short-term oscillators are confirming the rise in negative powers. The MACD, although in the negative region and above its red trigger line, looks to reclaim it, while the RSI is steering lower in the bearish territory. The stochastic oscillator is promoting the downside, signalling that the positive bounce in the price may have run its course.

If selling interest increases, preliminary support could commence at the lower Bollinger band, adjacent to the one-and-a-half-month low of 0.7225. Should these boundaries fail to halt the descent, the price may slide towards the 0.7191 barrier and the five-week low of 0.7169, reached at the end of September. Diving deeper, the bears could then aim for the 0.7105-0.7115 support band, moulded by the troughs last seen in August 2021.

If the pair regains buoyancy above the mid-Bollinger band at 0.7257 and the nearby 0.7273 level, initial resistance could arise in the vicinity of the mid-November highs, bordering the approaching upper Bollinger band and the 50-period SMA at 0.7296. Climbing further, the 0.7321 inside swing low could interrupt the test of a possible restrictive trend line, pulled from the 0.7555 high. From here, buyers would need to muster a more profound backing to overcome the resistance zone formed between the 100-period SMA at 0.7366 and the 0.7389 level. Successfully recapturing the area above the 200-period SMA at 0.7396 as well would bolster upside momentum, steering the price to tackle the 0.7431 high.

Summarizing, AUDUSD appears to be sustaining a sturdy bearish bearing below the SMAs and the 0.7366 high. 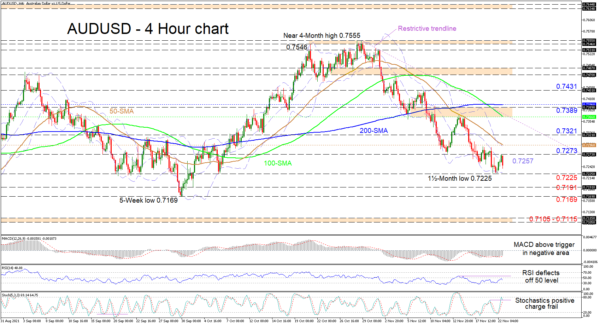