The greenback edged higher against most of its major rivals in dull Monday trading, leading to a EUR/USD decline down to 1.1956, its lowest since last Thursday, when ECB’s Draghi failed to down talk the common currency. The rally was driven my resurgent optimism among investors, as Hurricane Irma´s damages Florida will be far less than initially feared, and as North Korea decided to throw a party on Saturday for the 69th anniversary of the regimen, rather than launching more missiles. Equities edged higher worldwide, while the yen, and gold were the biggest losers of the day.

The macroeconomic calendar was quite scarce, with no major releases in Europe and the US, although the week has plenty to offer, starting for this particular pair next Wednesday, with the release of German inflation, EU Industrial Production and US August inflation.

The EUR/USD pair 4 hours chart shows that the decline may extend this Tuesday, as the price has broken below its 20 SMA that lost upward strength, whilst technical indicators entered negative territory, maintaining their strong downward slopes. The decline, however, remains corrective long term, as the price would need at least to break below the 1.1800 level to be at risk of a steeper decline, something quite unlikely unless the US Federal Reserve pulls the trigger by surprise this month, which has almost null chances of happening. 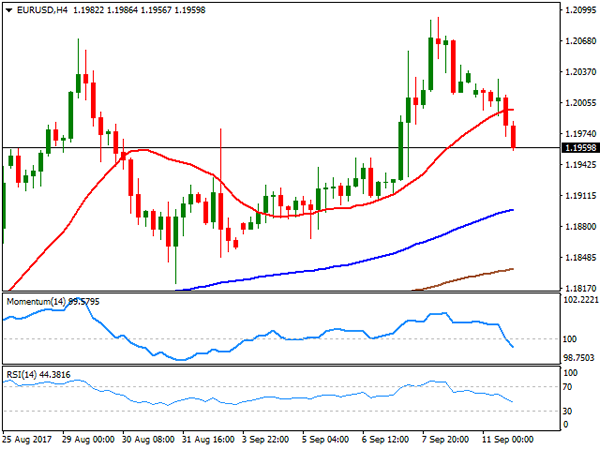 The USD/JPY pair challenged last Thursday’s high in the US afternoon, surging past 109.30 amid a sharp advance in Wall Street and a solid bounce in US Treasury yields. Risk aversion eased over the weekend, with the pair gapping higher at the weekly opening, and leaving that gap unfilled at the end of the day. The yield for the 10-year government note surged to 2.12%, bouncing from 2.06%, while for the 30-year note, yields surged to 2.74% from 2.68%. There are no big news scheduled in Japan for the upcoming session, which means that the pair may keep on advancing should Asian equities follow the lead of the their overseas counterparts. The 4 hours chart for the pair shows that the price is currently advancing above its 100 SMA, while technical indicators head strongly higher within positive territory. In the same chart, the 200 SMA is the next probable bullish target and the immediate resistance at 109.70, with gains beyond the level probably resulting on an extension up to 110.25, where the pair also has an unfilled gap from two weeks ago. 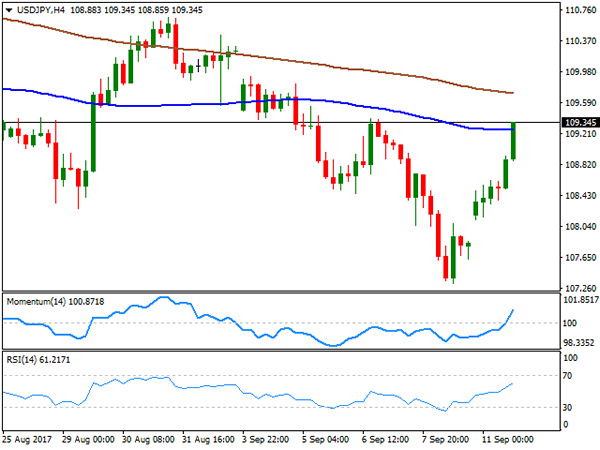 The GBP/USD closes the day marginally lower after a failed attempt to surpass Friday’s high of 1.3223 early London, as dollar’s recovery extended all through the day. The greenback benefited from improved risk sentiment, and a scarce macroeconomic calendar, but the Pound was among the best performers, holding on to gains ahead of the UK’s Parliament key Brexit vote. Policymakers will have to decide over the EU withdrawal bill by the end of the day, but given that the government has secured a deal to get the majority in the Commons House, seems there won’t be big surprises at this stage. This Tuesday, attention will center on UK’s August CPI and PPI data, more relevant ahead of Thursday ECB’s meeting. From a technical point of view, the 4 hours chart shows that the price is holding above a still bullish 20 SMA, but also that technical indicators have retreated from overbought territory, with the Momentum nearing its 100 level, and the RSI currently at 61, suggesting the decline could extend further, but as corrective. Beyond the mentioned Friday’s high, the next big hurdle comes at 1.3266, August monthly high, with a break above this last probably triggering stops and fueling the advance. 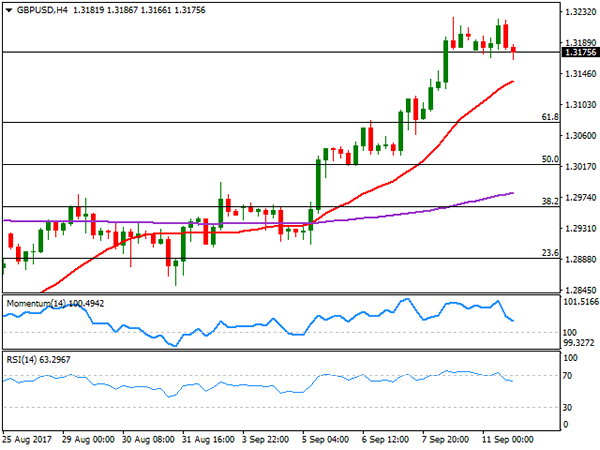 Gold prices came under strong selling pressure this Monday as risk aversion eased, with the commodity trading at its lowest in almost a week by the end of the day, around $1,326.60 a troy ounce. A stronger dollar amid easing geopolitical tensions and a strong bounce in equities pushed the commodity lower, also dumped for the sake of riskier, and more profitable assets. Curiously spot gapped lower at the weekly opening, and seems poised to fill another gap, left at the beginning of the previous week, when a North Korean nuclear test pushed the commodity higher, at 1,325.90. The daily chart for gold shows that technical indicators have begun correcting extreme overbought conditions, whilst the price remains far above all of its moving averages, in line with further downward corrections ahead. The 20 DMA particularly, stands now at 1,315.30, providing a dynamic support in the case of further dollar gains. In the 4 hours chart, the commodity is biased lower, trading below a bearish 20 SMA and with technical indicators heading sharply lower within negative territory, also leaning the scale towards the downside for the upcoming sessions. 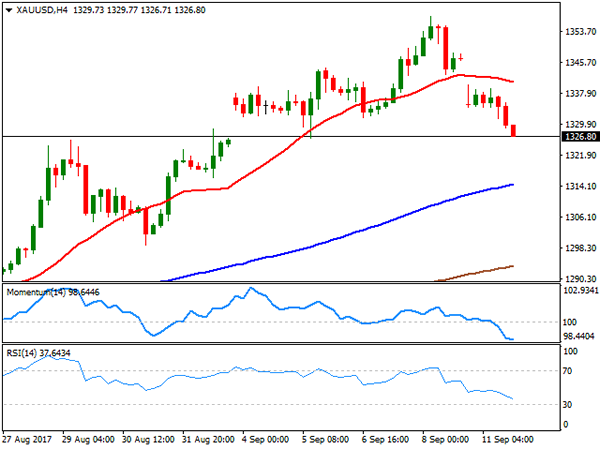 West Texas Intermediate crude futures reversed an early slide and closed the day with gains at $48.10 a barrel. Oil prices were quite volatile, as investor assessed the impact of Hurricane Irma in the US Florida. The initial decline came as a consequence of fears of diminishing demand for the black gold, but as the day went by, risk of a downturn in crude demand lessened, resulting in the late recovery. Further supporting the commodity were comments from Saudi Arabia officers, which talked about a three-month extension of the ongoing output cut deal. The daily chart presents a neutral stance, as the price remains trapped between horizontal 100 and 200 DMAs, although a brief dip below the shortest was quickly reverted, somehow indicating limited selling interest at this point. Technical indicators in the mentioned chart hold flat around their mid-lines, giving no clues on what’s next for oil. In the 4 hours chart, the price is also trapped between horizontal moving averages, with selling interest containing advances around the 200 SMA, and while technical indicators resume their declines after correcting oversold conditions, leaning the scale towards the downside. 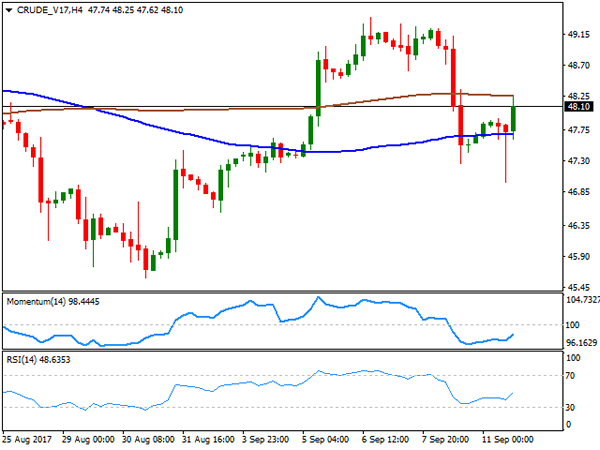 Wall Street ended the day with strong gains, as risk appetite returned after a quieter-than-expected weekend. The DJIA regained the 22,000 level, to end the day 259 higher at 22,057.37, while the Nasdaq Composite added 72 points, to 6,432.26. The S&P surged to a fresh 2017 record high after advancing 1.08%, ending the day at 2,488.11. Insurers companies followed the lead of their European counterparts, posting strong gains on Hurricane Irma consequences’ relief. DowDuPont was the best performer, gaining 2.88%, followed by Travelers that advanced 2.21%. Only three members closed down, with Home Depot losing 0.91% and General Electric shedding 0.71%. The index is at its highest in 4-weeks, and technical readings in the daily chart support additional gains ahead, as the index gained upward momentum after breaking above its 20 DMA, whilst technical indicators aim north well above their mid-lines. Shorter term, and according to the 4 hours chart, the index is far above all of its moving averages, whilst technical indicators maintain their upward strength, despite being in overbought territory, also favoring a new leg higher for this Tuesday. 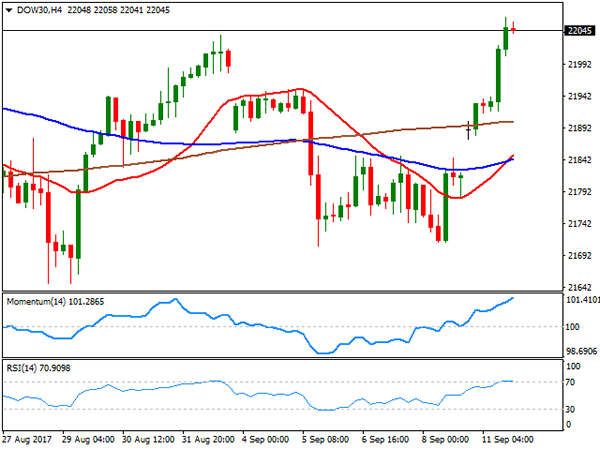 London equities ended mostly higher this Monday, with the FTSE 100 settling at 7,413.59, up by 0.49% or 36 points. Risk appetite was behind the advance after Hurricane Irma was downgraded to a tropical storm, with insurers companies surging by the most on speculation of lesser damages from the Hurricane than previously estimated. Within the Footsie, Provident Financial was the best performer, adding 3.77%, followed by EasyJet that added 3.37%. Mining-related equities edged lower, as gold fell to its lowest in over a week, resulting in Randgold Resources losing 1.54%. The worst performer was Associated British Foods that lost 4.96%. The index remains within its latest range, with a slightly positive tone in the daily chart, as technical indicators aim modestly higher above their mid-lines, whilst the index settled above its anyway directionless moving averages. In the 4 hours chart, the early gap sent the index above a congestion of moving averages, a sign of lack of directional strength, whilst technical indicators lost their upward potential, but hold within positive territory anyway. 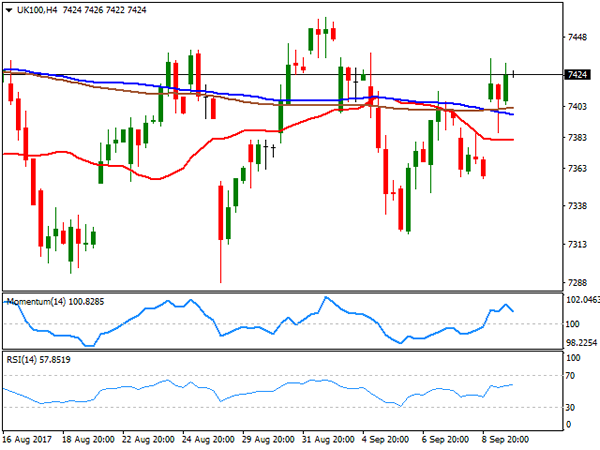 European equities edged higher, advancing by the most in almost a month, on improved market’s mood. The German DAX closed at 12,475.24, up 173 points, on easing concerns over Hurricane Irma economic consequences, and a quiet North Korea celebration over the weekend, with no missiles involved. Financials were the best performers in Europe, and within the DAX, Muenchener led advancers, ending the day up 4.36%, followed by Commerzbank and Deutsche Bank, up 3.36% and 2.86% respectively. Daimler was the only one to close in the red, down by 0.07%. The daily chart for the benchmark shows that it settled above its 100 DMA for the first time since July 24th, while technical indicators keep heading higher within positive territory with uneven strength, but still favoring additional advances for this Tuesday. In the 4 hours chart, the index settled far above all of its moving averages, with the 20 SMA accelerating above the 100 and 200 SMAs, but technical indicators easing from extreme overbought readings, anticipating at least some consolidation ahead and before the next directional move. 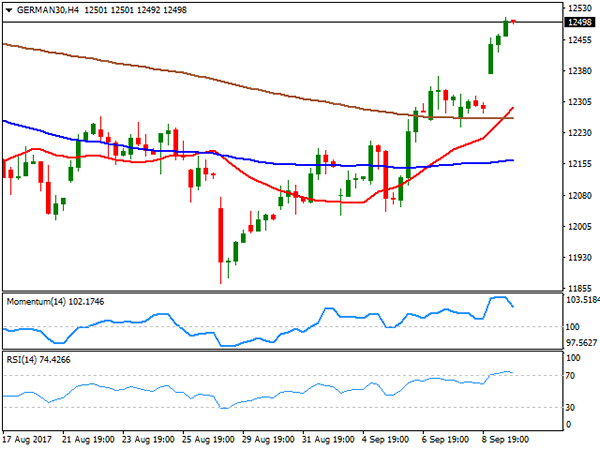