WTI oil futures have managed to maintain their bullish bearing, which began at the start of December 2021 from 62.25, and are currently facing the November 10 high of 83.28. The longer-term simple moving averages (SMAs) are sustaining a positive incline, backing the broader uptrend in the commodity.

The Ichimoku lines are indicating a small pause in bullish impetus, while the short-term oscillators are suggesting additional advances in the black liquid. The MACD, in the positive zone, is distancing itself further north of the red trigger line, while the positively charged stochastic oscillators’ lines are promoting extra price gains. The RSI is toying with the 70 overbought level but is not showing significant signs that sellers are starting to gain an advantage.

In the positive scenario, resistance may originate from the 83.28 barrier prior to buyers confronting the seven-year high of 85.39 and the nearby resistance obstacle of 86.39. Conquering these hurdles could reinforce optimism and encourage buyers to further aim for the 88.17 level before pursuing the 90.72 and 91.77 highs, from the early part of October 2016.

If upside progress is curbed by the 83.28 boundary, support could commence from the 80.45 mark ahead of the red-Tenkan-sen line at 78.71 and the adjacent 77.82 low. Dropping from here, the sellers may meet a hardened support zone moulded between the 100-day SMA at 75.60 and the Ichimoku cloud’s upper band at 73.79. Should a deeper retracement evolve, the 200-day SMA at 71.73 and the clouds lower band could come into play.

Summarizing, WTI oil futures are sustaining a bullish bias above the 77.82 low and the 73.79-75.60 support band. That said, a drop in the price beneath the 200-day SMA could start to feed negative tendencies in the commodity. 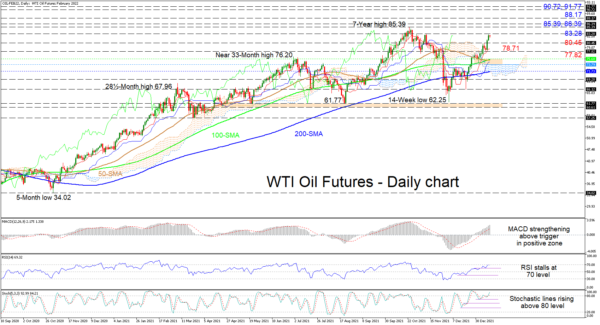