AUDUSD turns somewhat neutral as the pair’s improvements have failed to take flight for around one-and-a-half-months now. Currently, the simple moving averages (SMAs) are not implying a specific trend is in place, while the Ichimoku lines are also indicating weak and unclear directional forces in the pair.

The short-term oscillators are reflecting conflicting signals in momentum, indicating the indecision in the pair to develop a decisive trend. The MACD is below its red trigger line and has glided beneath the zero mark, while the stochastic lines are powering above the 20 level, promoting positive price action. That said, the RSI is hovering in the bearish territory, sponsoring no real change in momentum.

To the upside, an immediate zone of resistance from the 50-period SMA at 0.7212 until the red Tenkan-sen line at 0.7243 could impede the pair from recouping its latest losses. However, should buyers manage to overstep this congested obstacle zone, they may then meet the nearby 0.7264 barrier before jumping toward the neighbouring highs of 0.7293 and 0.7314. Should the bulls revive the hike north, they may eye the 0.7367-0.7394 resistance border extending back to November 2021.

Summarizing, AUDUSD is just about sustaining its neutral-to-bullish tone above the 200-period SMA and the 0.7129 trough. A price decline stretching beneath the 0.7082 low could trigger negative concerns in the pair. 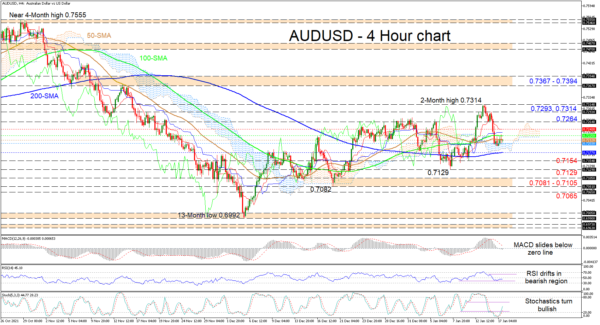