EURJPY Bounces Off 2-Week Low But More Upside is Needed

EURJPY has quickly recovered Friday’s drop to a two-week low of 129.77, bouncing back above its simple moving averages (SMAs) and the 50% Fibonacci level of the October-November downfall.

Despite the positive correction, downside risks continue to linger in the background as the RSI and the Stochastics are preserving a downward direction below their December peaks, while the MACD is still hovering below its red signal line.

Negative risks could dwindle if the pair extends its rebound sustainably above the short-term resistance trendline at 131.36, and more importantly, beyond the 61.8% Fibonacci of 131.53. If that turns out to be the case, the price could pick up fresh momentum to meet the 132.00 psychological mark, while higher, the bulls will need to claim the tough 132.55 barrier to access the four-month high of 133.47.

In summary, EURJPY has not escaped the bearish play despite the latest upturn. For that to happen, the bulls will need to successfully claim the 131.35 – 131.53 restrictive region. 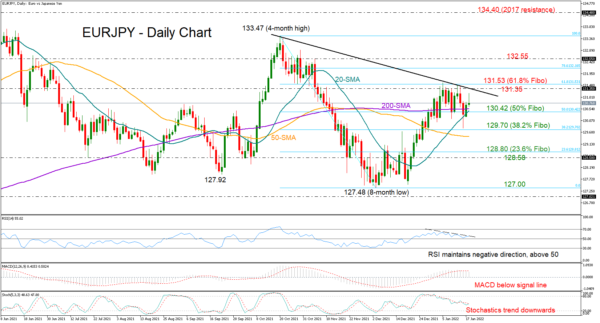