GBPUSD has retraced nearly 50 percent of the three-week rally that began around the 1.3200 handle, but negative forces are diminishing as the drop approaches the lower Bollinger band at 1.3428. The longer-term simple moving averages (SMAs) continue to endorse a broader bearish trajectory in the pair.

The short-term oscillators are tilting more to the downside despite the stochastic oscillator signalling some weakness in bearish pressures. The MACD, in the positive region, is distancing itself beneath its red trigger line, while the RSI is sliding lower in the negative zone. As said, the stochastic lines are attempting to come back from oversold territory, hinting that buyers are fighting back.

If the current price route persists, prompt support could arise from the lower Bollinger band at 1.3428, fortified by the 50-day SMA. However, should the price dip below these obstacles, the nearby 1.3333-1.3384 support barrier may try to impede sellers from fully taking control of the pair. In the event sellers triumph, they could then run the pair towards the one-year low, residing in the 1.3160-1.3200 support area, which holds multiple lows from the first part of December 2021. Nonetheless, downward pressures would need to also break below the adjacent 1.3105-1.3135 support belt to restart the bigger decline in the pair.

On the other hand, if an increase in buying interest overcomes current downward forces, the bulls could face an initial resistance band formed by the 100-day SMA at 1.3528 and the mid-Bollinger band at 1.3572. Should buyers stay in the fight, they may drive the price to test the 1.3661 high before challenging the critical 1.3700-1.3748 resistance section. Only a break of this fortified boundary could encourage the bulls to tackle the neighbouring 1.3803-1.3834 stretch of highs around the latter part of October 2021, in order to try and reinstate a bullish tone in the pair.

Summarizing, GBPUSD is exhibiting a slight tilt to the downside below the longer-term SMAs and the 1.3748 high. That said, for the neutral-to-bearish bias to turn bullish, the price would need to climb above the 1.3803-1.3834 zone, while a decline extending past the 1.3105-1.3134 support band may secure strength in the bearish outlook. 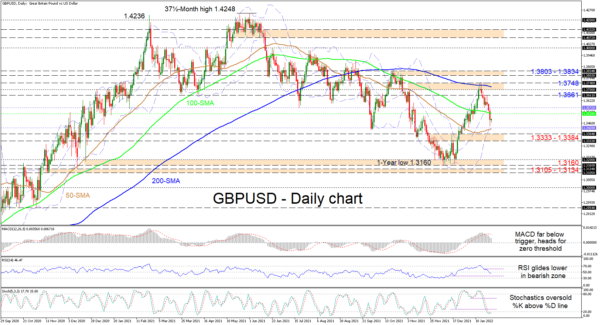