The GBP/USD posted some gains on Tuesday, but seems too overbought to stay near the 1.3618 previous high. The pair is still located in the green area, so it could climb towards new peaks after a minor decrease.

Price has found temporary resistance1.3618 level and dropped below a broken dynamic resistance. The Cable has managed to drag the pair higher as the greenback was weakened by the USDX’s drop. The dollar index slides further on the short term after the failure to close above the 92.49 static resistance (support turned into resistance).

The dollar index is still under pressure because is locked below some important resistance levels, he needs a helping hand from the FOMC in the afternoon, but I’m not very confident that will receive one. There are rumors that said that the FED will raise the rate in December. Personally, I’m expecting for a dovish speech, which could punish the USD.

Price is fighting hard to stay above the 150% Fibonacci line (ascending dotted line) of the ascending pitchfork, but I don’t believe that will succeed. Could come down to retest the warning line (wl1) and also the upside line of the ascending channel.

The next upside target remains at the lower median line (lml) of the ascending pitchfork, but a valid breakout above the 150% line will invalidate a further increase. 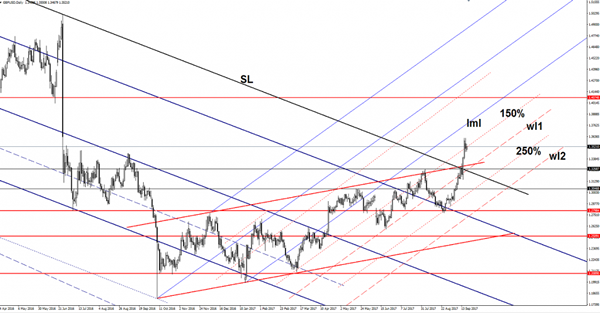