AUDJPY has corrected to the 88.00 handle, which is the 50.0% Fibonacci retracement of the 12-week rally from 80.35 until the 95.73 peak. Despite the price failing to snowball below the support barrier formed by the 50.0% Fibo at 88.00 and the 87.20 January 2018 inside swing low, the bearish tone has yet to be fully offset. On that note, the simple moving averages (SMAs) continue to endorse the bullish picture in the pair.

Contrary to this, the Ichimoku lines are indicating that the recent sturdy negative forces have temporarily stalled. Moreover, the short-term oscillators are reflecting mixed notions of directional momentum. The MACD is suggesting the decline in the pair remains intact despite buyers fighting back. Meanwhile, the uptick in the stochastic %K line, and the bounce in the RSI in the bearish region, both mirror the latest efforts from buyers but have yet to provide convincing evidence that they have gained the upper hand.

Preliminary resistance to positive developments in the pair is emanating from the 0.8900 hurdle. If bullish forces continue to grow, next upside obstruction may come from the 38.2% Fibo of 89.85 before the bulls tackle the fortified 90.42-91.00 resistance zone. Should price buoyancy persist in the pair, the price could then eye the 91.48-92.08 barrier, the latter being the 23.6% Fibo.

On the flipside, if sellers resurface, the 87.20-88.00 support boundary may be retested prior to the ascending 100-day SMA, residing at the 86.72 high, which was logged back in February 2018. Should the pair remain heavy, the region of support between the 61.8% Fibo of 86.24 and the 85.72 mark could come under attack. In the event this section fails to curb the descent in the pair, the price may then return to a broader consolidation that gripped the pair from May 2021 until March 2022. Any further moves lower could snag around the 83.79-84.58 support area.

Summarizing, AUDJPY’s broader bullish mood is likely to remain active if the pair holds north of the 87.20-88.00 boundary and the cloud. Yet, for convincing bullish prospects to evolve, the price would need to climb back above the 94.00 mark. That said, diving beneath the 85.72-86.24 support could reinforce negative tendencies in the pair. 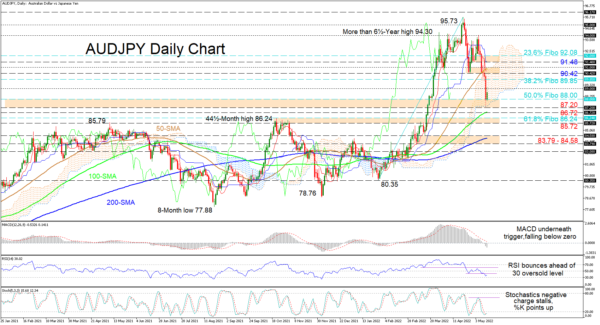