AUDUSD could not find enough buyers to overcome the 0.7050 resistance level, with the spotlight remaining to the downside as the steep negative bias is still holding.

Encouragingly, however, the RSI and the MACD continue to hold above their recent lows, while the latter has also managed to crawl back above its red signal line, providing some optimism that the bulls may not give up the battle yet.

The 0.7050 number, which overlaps with the 20-day simple moving average (SMA), could challenge any bullish attempts towards the bearish crossover within the 40- and 200-day SMAs near the 0.7265 barrier. The bottom of the Ichimoku cloud is also in the neighbourhood near the 0.7340 resistance. Hence, any breakout at this point may gather extra interest, with the price likely speeding up to 0.7457 in the aftermath.

Alternatively, an extension lower again will strengthen the case for a down-trending market, likely activating a fresh bearish wave below the almost two-year low of 0.6827. Failure to hold above that floor could cause another negative extension towards the 0.6770 restrictive region, registered in June 2020. Even lower, the market could meet the inside swing high of April 2020 at 0.6570.

In brief, AUDUSD has been developing in a descending movement since the beginning of the previous month; however, upside corrections cannot be ruled out in the near term according to the technical indicators. 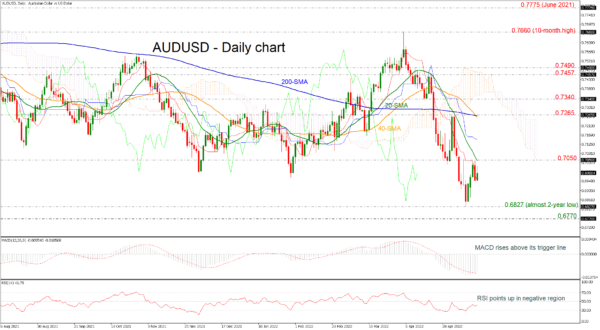