The American dollar spent Thursday giving back part of the Fed’s triggered gains, ending the day with uneven results, but down across the board, anyway. The common currency gained in spite of comments from ECB’s Executive Board member Peter Praet, who said that the time has no yet come for the ECB to start winding down its massive monetary stimulus. ECB’s head, Mario Draghi, was also on the wires, but said little over current monetary policy, beyond saying that monetary policy is not the right instrument to address financial imbalances in the euro zone. Backing the EUR was consumer confidence that improved from -1.5 to -1.2 in September, the highest level in about 16 years.

In the US, macroeconomic figures were mixed, as in the week ending September 16, initial jobless claims reached 259K, a decrease from the previous week’s revised level of 282K. The 4-week moving average, however, was 268,750, the highest level for this average in over a year. Additionally, manufacturing firms reported an improvement in regional manufacturing conditions in September, according to the Philadelphia Fed monthly survey, with the index up for September to 23.8 from previous 18.9, also beating market’s expectations of 17.9, but July’s Housing Price Index came in below expected up on the month by 0.2%.

The EUR/USD pair peaked at 1.1953 to end the day in the 1.1930 region, pretty much flat for the week, midway between 1.18 and 1.21, the range established late August. Potential gains are being limited by speculation that the ECB will continue with some sort of verbal intervention on spikes through the 1.2000 level, but a dollar’s steeper recovery is on doubt, weighed by political jitters and the lack of progress in the growth agenda. Technical readings in the 4 hours chart indicate that the upward potential is limited, as technical indicators have posted modest recoveries within negative territory, but remain in the red and with little directional strength, whilst the price is incapable to surpass its 20 and 100 SMAs, with the shortest providing an immediate resistance at 1.1965. 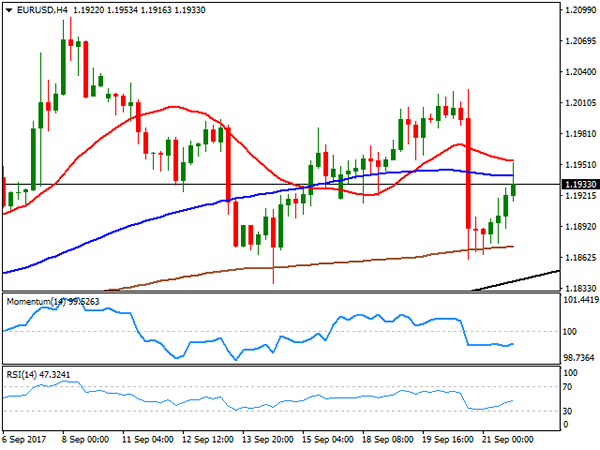 The USD/JPY pair advanced for fifth consecutive day this Thursday, reaching a daily high at 112.71 during early trading hours, and after the BOJ stuck to its ultra-loose monetary policy. Following Fed’s hawkish announce, including a third rate hike for this year and details on how the US Central Bank will unwind its balance sheet, the on-hold stance of Japanese policymakers highlighted the imbalances between both central banks, supportive of the pair’s advance. The pair fell down to 112.13 early US session, but recovered to close near the mentioned high, following the behavior of US Treasury yields, which eased intraday, but managed to regain their post-Fed levels ahead of Wall Street’s close. The pair remains biased higher according to technical readings, as in the 4 hours chart, the price continues developing well above its 100 and 200 SMAs, whilst the Momentum indicator is aiming to regain its bullish strength as the RSI indicator remains within overbought territory. The immediate resistance comes at 112.86, July 17th daily high, and an advance beyond it will open doors for a recovery up to the 114.40 price zone, where the pair topped out in May and July. 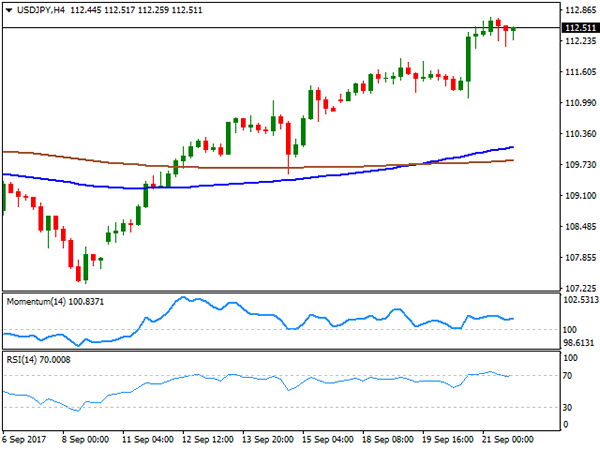 Having spent most of the first half of the day confined to a tight range around the 1.3500 level, the GBP/USD pair broke higher in the US afternoon, ending the day some 20 pips below the 1.3600 level, following news indicating that UK’s PM May is willing to pay the EU up to €20b, but only if the UK has granted access to the single market after the Brexit, alongside with some form of custom union. PM May is scheduled to speak in Florence, this Friday to finally present her Brexit strategy. So far, the UK and the EU have made little progress on Brexit negotiations, and May´s offer could be decisive when it comes to move forward. The pair gained a modest upward potential with the late intraday advance, but would need to break beyond the 1.3600 figure to be able to advance at a firmer pace. In the 4 hours chart, the price has recovered above a now flat 20 SMA, whilst technical indicators entered positive territory, maintaining their upward slopes, although with limited momentum, favoring the upside anyway. 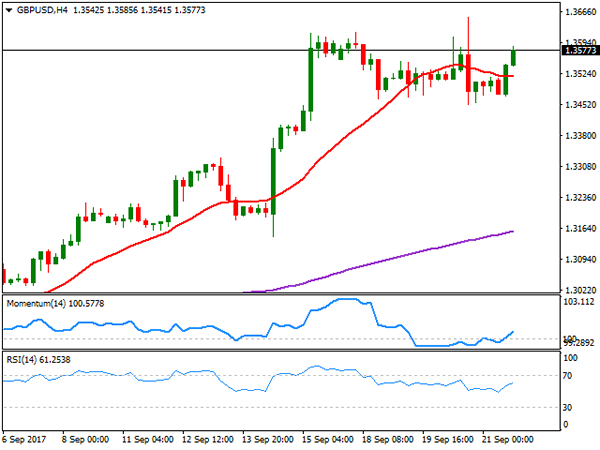 Spot gold posted its lowest settlement since August 25th, ending the day at $1,291.30 a troy ounce, weighed by US Federal Reserve latest announcement. The central bank revived hopes for a third rate hike this year, with odds of such move now at 72% from 51% before the event. Risk-related headlines coming from US President Donald Trump weren’t enough to boost demand for the metal, as he said that "North Korea’s nuclear weapons and missile development is a grave threat to peace and security in our world and it is unacceptable that others financially support this criminal, rogue regime," when signing an executive order to further isolate the country. In the daily chart the bearish momentum remains strong, as technical indicators keep heading sharply lower within bearish territory, whilst the price moved further below its 20 SMA, which gains bearish traction far above the current level. Shorter term, and according to the 4 hours chart, the risk is also steady towards the downside, with the 20 SMA crossing below the 200 SMA, both around 1,305.00, and technical indicators holding flat well into bearish territory, with no signs of changing course. 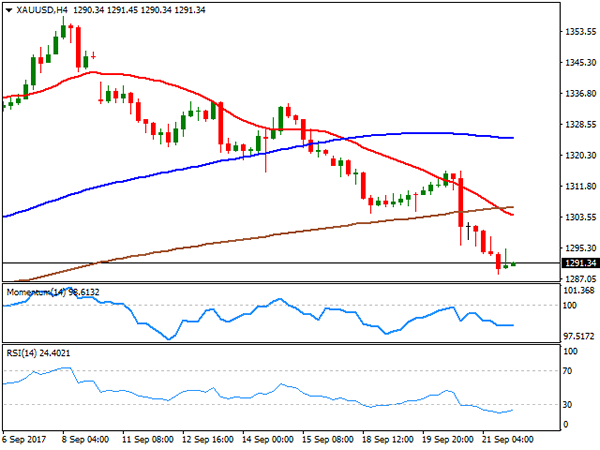 West Texas Intermediate crude futures closed Thursday little changed at $50.64 a barrel, reverting an early slide down to 50.06. The OPEC and non-OPEC producers who agreed an output cut late last year, are scheduled to meet this Friday in Vienna to discuss the market impact of their agreement, and the progress achieved so far. Any mention on an extension of their deal beyond its current end, at March 2018, may boost the black gold. In the meantime, the daily chart shows that the price holds near its recent highs, well above still directionless 100 and 200 SMAs, and that technical indicators keep turning lower, but well into positive territory, rather reflecting the ongoing consolidation than suggesting an upcoming decline. In the 4 hours chart and for the short term the commodity retains a positive stance as the price holds within a consolidative range well above a bullish 100 SMA, whilst technical indicators have managed to regain the upside after approaching their mid-lines, still poised to test the 52.00 critical level. 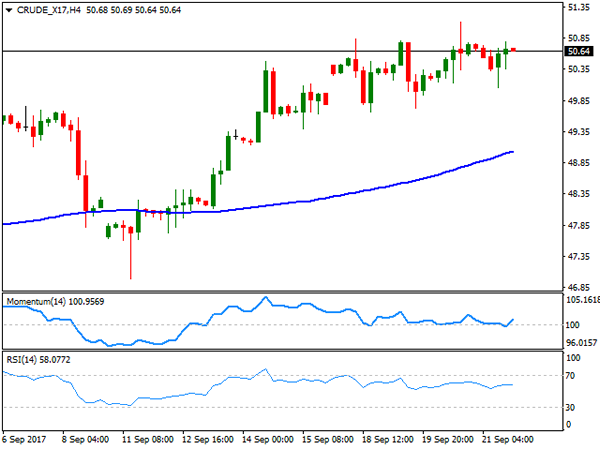 The Dow Jones Industrial Average put an end to its bullish run, closing the day in the red after nine consecutive advances. The index lost 53 points, or 0.24%, to end at 22,359.23. The S&P shed 7 points and closed at 2,500.60, while the Nasdaq Composite also closed in the red, at 6,422.69 after losing 33 points. Banks remained on the winning side, with Goldman Sachs up 0.81% and JP Morgan gaining 0.53%, both among the best performers. Tech shares led the way lower, with Apple down 1.72%. The daily chart shows that the index held anyway above Wednesday’s opening, and far above bullish moving averages, whist the upward Momentum remains strong. The RSI indicator in the mentioned chart has barely retraced, still within overbought readings, all of which limits chances of a steeper decline. Shorter term, and according to the 4 hours chart, the index presents a neutral stance, stuck around a bullish 20 SMA, and with technical indicators have pared their declines before turning flat within positive territory. 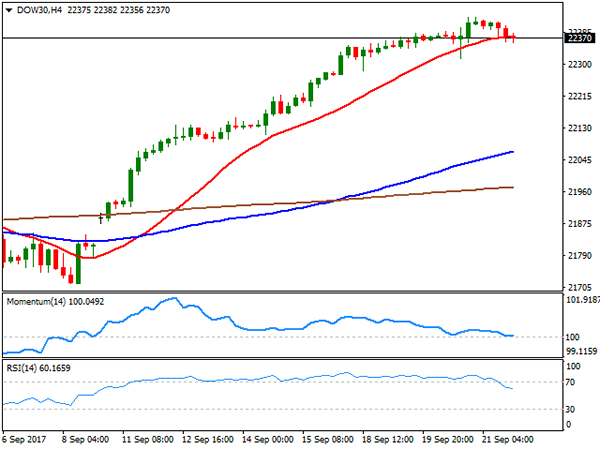 The FTSE 100 lost 8 points or 0.11% to end the day at 7,263.90, with little to motivate investors and ahead of PM May’s Brexit plan announcement this Friday. Most members were down, with Kingfisher being the worst performer, shedding 4.09%, followed by J Sainsbury that lost 4.05%. Only 30 members closed higher, with Johnson Matthey adding 14.6%, after the company revealed a plan for a £200m investment in battery technology as it aims to become a key player in the coming electric car revolution. The index, however, fell in after-hours trading, as the Pound broke higher against its major rivals, heading into the Asian opening some 50 points below the mentioned close. Daily basis, the technical bias remains towards the downside, as indicators resumed their declines within bearish territory and with the Momentum at fresh multi-month lows, whilst the index keeps developing below a bearish 20 DMA. In the 4 hours chart, the index settled around a sharply bearish 20 SMA, whilst the RSI indicator heads lower around 39, also supporting a bearish extension for this Friday. 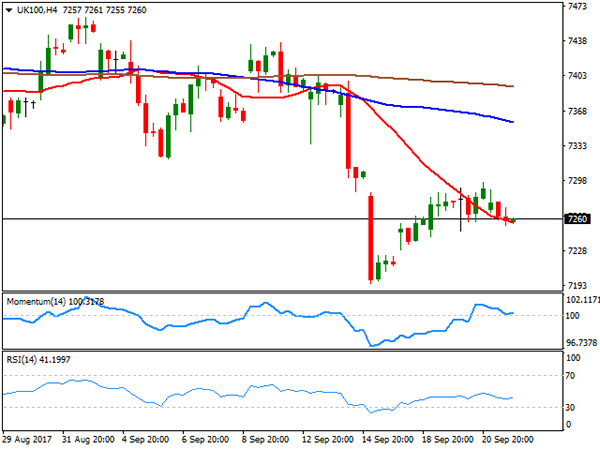 The German DAX closed at 12,600.03, up 30 points, as persistent strength in back-related equities lifted European equities benchmarks. Local indexes followed the lead of Wall Street, after the US Federal Reserve hawkish stance on tightening for the foreseeable future. Banks could make more money on charging interest when rates rose. Commerzbank led advancers, surging by 2.95%, followed by Deutsche Bank that added 1.78%. ThyssenKrupp, on the other hand, was the worst performer, down 3.49%. The index holds on to gains ahead of Friday’s opening, although the daily chart shows that technical indicators are beginning to ease from near overbought readings, indicating that a downward correction is possible, although not yet confirmed. In the shorter term, and according to the 4 hours chart, the index turned neutral-to-bullish, as the Momentum indicator stands flat around its 100 level, whilst the price holds above an also horizontal 100 20 SMA. The RSI indicator in this last time frame, retreats from overbought levels, heading modestly lower around 62. 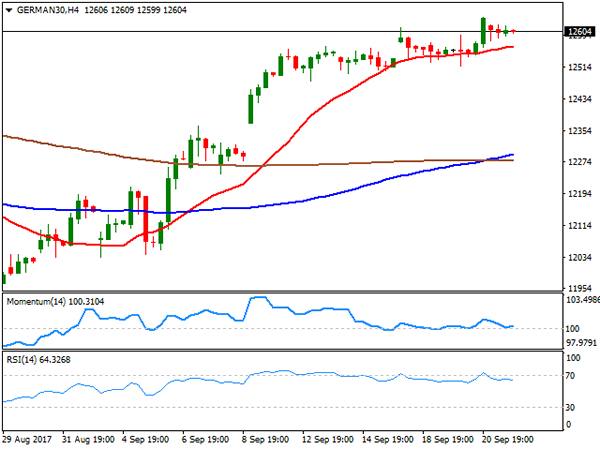