Gold Fell to Support But Unlikely to Turn Higher Soon

The price of gold fell to a new nine-month low on Tuesday, at one point falling below $1725. In the region of $1720-1740, gold has been finding support in the declines of the last 15 months, and the daily charts clearly show that gold sellers have been slowing down lately. 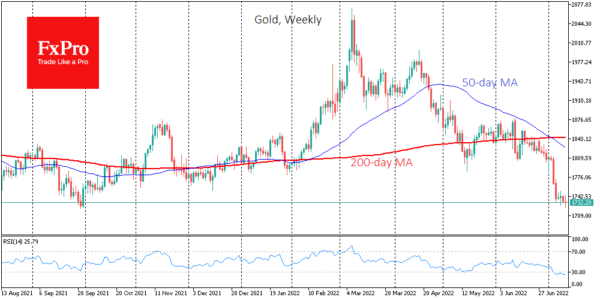 Interestingly, gold has been living its life in the last few days, experiencing a sharp drop earlier in the month, but gaining support last week. Judging by the market dynamics, the most aggressive decline of the single currency in the previous week has supported gold buying.

Since March, the euro gold price has already found support on several occasions at the approach of the €1700 area, an important milestone, and the area of the high in August 2020, maintaining a substantial downside potential. 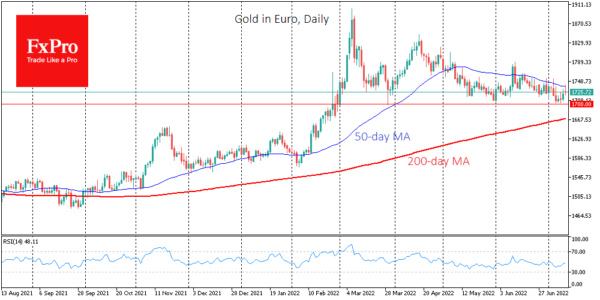 It would be naive to assume that buying gold now would protect capital in the event of existential problems in the Eurozone. But this assumption is difficult to confirm with history.

In 2012, gold was losing with the euro, and it only reversed upwards in the second half of the year following the recovery of the eurozone confidence.

Gold has reached the 61.8% of the 2018-2020 growth wave with accumulated local oversold. In such an environment, a short-term rebound is highly likely, which would be true if the dollar also loosens its grip.

However, a rebound in the coming days could prove to be a bull trap or not at all. Towards the most pessimistic scenario, seasonality and downside potential on higher timeframes is in favour.

Gold rarely changes its chosen trend in March-April, but it often does so in August-September. On the weekly candlesticks, the gold is far from the oversold area, and it is easy to see that we have seen reversals on these intervals when the oversold area is touched.

A potential target for the bears could be the 200-week moving average, pointing upwards and now passing through $1650.