EURCHF entered a sliding mode this week, after hitting 0.9800, and is now hovering near the July 29 low, at 0.9700. Overall, the pair has been trading in a downtrend, staying below all three of the plotted moving averages, since mid-June.

The likelihood for further declines is enhanced by both the RSI and the MACD. The former has turned back down and is now approaching 30 again, while the latter remains well within its negative territory. That said, it lies above its trigger line, pointing up, which could imply another small bounce before an extension of the downtrend.

A break below 0.9700 would confirm a forthcoming lower low on the daily chart, allowing the pair to flirt with its all-time low at 0.9645, which was hit back in 2015 after the SNB removed the 1.20 floor, triggering a massive flash crash. Now, in case the bears do not stop there this time, they will enter uncharted territory, and the next support to consider may be the potentially psychological zone of 0.9500.

On the upside, the move confirming that the bulls have stolen all the bears’ swords – at least for a while – may be a recovery above 0.9800. This could signal the completion of a short-term double bottom and may initially allow advances towards the July 21 high, at 0.9950, near the 50 – exponential moving average (EMA). If there are no sellers to be found near that area either, the bulls could climb to the peak of July 4, at 1.0050.

To wrap up, EURCHF is getting closer to the 2015 flash crash low, where a break will take it into unseen grounds. That said, if the bulls decide to reenter the game and drive the action above 0.9800, a decent recovery may be possible. 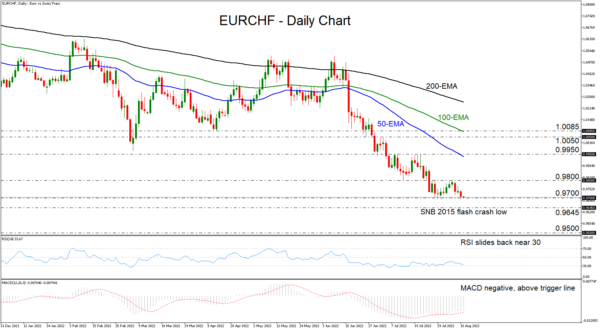