EURGBP traded higher yesterday, after hitting support at the crossroads of the 0.8385 level and the tentative upside line drawn from the low of low of March 7. Nonetheless, the advance remained limited near the conversion point of all the plotted exponential moving averages (EMAs), slightly below the downside line drawn from the high of June 15.

This likely keeps the near-term outlook neutral, a view also enhanced by the daily oscillators. The RSI rebounded somewhat, but it has now flattened near its 50 line, signaling a lack of directional momentum. The MACD, although negative, remains above its trigger line and is getting closer to zero, suggesting that the downside speed is now fading.

The bears may regain full control upon a dip below 0.8385, which could also confirm the break of the upside support line taken from the low of March 7. The next area to consider as a support may be at 0.8340, a zone which prevented the bears from drifting further south at the beginning of this month. However, if that obstacle is cleared this time around, a dive all the way down to the April 14 low at 0.8250 may be possible.

Alternatively, the move that could encourage more bulls to jump into the action may be a recovery above the high of August 12, at around 0.8495. This would confirm a forthcoming higher high on the daily chart and could set the stage for advances towards the peak of July 21, at 0.8583. Another break above 0.8583 could extend the advance towards the July 1 high, near 0.8675.

In short, EURGBP is stuck between two diagonal lines, and although the plotted moving averages are providing resistance, our oscillators detect a lack of, or little, directional momentum. This likely paints a neutral near-term picture for now. 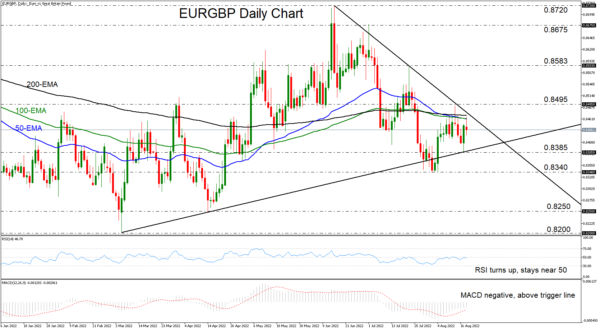